The Denver Broncos made it clear prior to the start of free agency that they were planning to upgrade the running back position. And while rumored top target DeAngelo Williams re-signed with the Carolina Panthers on Tuesday, the Broncos lived up to their word and acquired a running back Friday when the team reached an agreement with former Raven Willis McGahee. 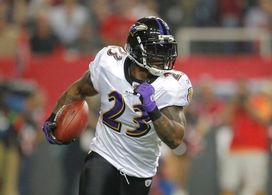 ICONAfter four years in Baltimore, McGahee is headed to Denver.

According to Adam Schefter of ESPN, it’s a three-year deal worth $7.5 million.

The move reinforces the belief that the Broncos aren’t happy with 2009 first-round pick Knowshon Moreno, who has posted just two 100-yard performances in 29 career games. With McGahee in the mix, many believe Moreno will be used primarily as a third-down back in 2011.

While he may be entering the twilight of his career at 29-years of age, McGahee brings some power to the Denver backfield and is just two years removed from a 12-touchdown campaign.

However, he averaged only 3.8 yards per attempt last year and hasn’t carried the ball more than 110 times in a season since 2008.