With Monday night’s Alabama-LSU rematch for the national championship bringing a close to the 2011-2012 college football season, you can bet the sportsbooks in Las Vegas will be jam-packed with fans and action junkies alike looking to get down on anything from prop bets to the total.

New Orleans may be hosting the party, but Vegas is where the action’s at.

With kickoff just a few hours away, let’s take a look at Monday night’s championship game from a betting perspective and see if we can find some value in anything Sin City has to offer.

CLICK HERE for the point spread for tonight’s game.

The rundown: We’ve seen the LSU Tigers go from as high as a 2.5-point favorite at the Wynn sportsbook in Las Vegas to a 2.5-point underdog in the 37 days this game has been available to the betting public. With approximately 63% of the action coming in on the undefeated Tigers and the line heading in the opposite direction, it’s clear that the big money is backing Alabama. What else could possibly force a 5-point movement?

To further the case that betting Alabama will likely put you on the sharp side for the BCS Championship game, Sterling Ross wrote an intriguing piece over at Covers.com Monday stating that legendary sports bettor Billy Walters could be the reason the line has moved towards the Crimson Tide. No stranger to six-figure wagers, Walters’ has the power to move a point spread, should sportsbook directors find out which way he’s betting. 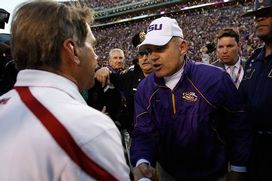 It all comes down to this Monday night in New Orleans.

As for where this game ends up, I spoke with Johnny Avello, director of sports operations for the Wynn and Encore sportsbooks in Las Vegas, Monday morning about what’s going on at his shops.

“We’re at Alabama -2.5 and it’s been mostly one-sided for the last day or so,” Avello told the National Football Post. “The game might make it to -3, but those 3’s wouldn’t last long. I see it closing at Alabama -1.5 to -2.5 depending on the location, with the total no higher than 41.”

Speaking of the total, the LSU and Alabama defenses came to play in the first meeting between these two teams back on November 5, when the Tigers pulled off a 9-6 overtime victory that comfortably stayed under the closing total of 41.5. Caesars Palace Senior Race & Sports Analyst Todd Fuhrman told me last Thursday that he wouldn’t be surprised if the rematch went over, as these two offenses may be inclined to open up the playbook a bit more after having a month to prepare for their final game of the season.

At the moment, 54% of the public is backing the under, but the total has moved from 39 to 41 indicating that the big money may agree with Fuhrman that this game is headed for more scoring than we saw last November in Tuscaloosa.

Alabama is 6-2 against the spread in their last eight games against LSU, while the under is 14-3 in Alabama’s last 17 games on turf and 4-1 in LSU’s last five games as an underdog.

The pick: I may be on the wrong side for the final game of the season, but LSU has cashed a lot of tickets for their backers over the last few months. If Les Miles’ Tigers could pull off a win on the road at Alabama, I see no reason why they couldn’t do it again in New Orleans. In a sentimental state of mind, I’ll take LSU and the points.

Top play: UNDER (41). These defenses are playing for keeps and I wouldn’t be surprised to see both offenses stall out in the early stages of this game due to nerves and rust. A 6-3 halftime score sounds reasonable and would put us on pace for a cover.