After this weekend's action, it's hard to imagine what the next biggest game in recent memory was. "The Big Shootout", a documentary by filmmaker Mike Looney, will take many back to what might be the first big game of their lives. 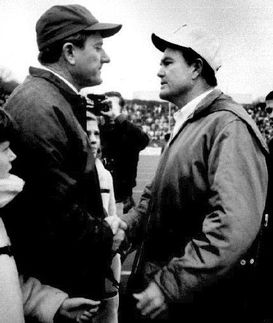 At the start of the 1969 season, ABC publicist Beano Cook was approached and asked to handpick one game from that season's schedule and move it to December 6th for a made-for-tv spectacle to celebrate the 100th anniversary of college football. The only requirement was that the two teams, before a single game was played, should be #1 and #2 in the nation by the day of the game. In a time before the BCS computer, Cook scrutinized the entire college schedule game by game before finally recommending Texas vs. Arkansas for the date.

The cards that fall in place to result in the game coming to fruition as planned are nothing short of a miracle. Outside the safety of the collegiate bubble, the Vietnam war plays out, claiming friends and family of players on both sides. On campus, African-American students rally to protest Arkansas' tradition of playing "Dixie" after touchdowns. President Richard Nixon plans to attend the game, another first at the time, apart from Army-Navy matchups.

The film weaves excellent footage from the era, and most importantly the game, with present-day interviews from almost every living member of both sides, including Arkansas coach Frank Broyles, who, until this film, hadn't ever spoken about the game in public. That fact alone makes this worth seeing. Broyles, this tremendously charismatic figure, even in his mid-80's, is incredible to listen to. He clearly has some unresolved demons that he wants to exorcise, and the film does the best possible job in letting him do that. As filmmaker Mike Looney told me, "We just turned on the camera, and let him go."

Broyles' therapeutic release aside, there's plenty more to love about the film. Each and every player brings with them a unique perspective on every aspect of the game, the war, and even President Nixon. They are characters, through and through. Though it's clear that many aspects of the movie could be standalone movies by themselves, just enough time is spent on each part where you never feel shortchanged.

I won't spoil all of the twists and turns along the journey. Even being familiar with the game and the outcome, I was continually surprised. I think you will be, too.

Our "Throwbacks" podcast, released next week, will highlight the game and include interviews with filmmaker Mike Looney and Texas running back, Bobby Mitchell. The film will be released December 6th, but you can pre-order the movie for yourself using the player below.

Yekra is a revolutionary new distribution network for feature films.

On December 6th, 1969, in the wintry landscape of Fayetteville, Arkansas, The Texas Longhorns and Arkansas Razorbacks met in what was heralded then and in the decades since as the game of the century. The game coined “The Big Shootout”, by Texas coach Darrell Royal, was the brainstorm of television, foreshadowing televised sports’ heavy hand in major sporting events in years to come.