The Pro Football Hall of Fame Selection Committee, which is comprised of 46 media members who cover the NFL, cut the list of 126 modern era nominees to 25 semi-finalists on Wednesday. The modern era list will be reduced to 15 nominees on January 8. The final nominees will consist of the 15 modern era finalists and the two nominees from the Seniors Committee, punter Ray Guy (Oakland/Los Angeles Raiders) and defensive end Claude Humphrey (Atlanta Falcons and Philadelphia Eagles). The 2014 Hall of Fame class will be announced in New York on February 1, the day before Super Bowl XLVIII. Four to seven inductees, with a maximum of five modern candidates, will make up the 2014 class. 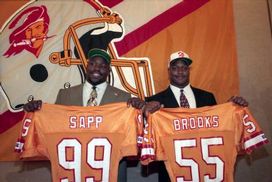 Sapp and Brooks served as the leaders for Tampa Bay's top-ranked defense.

Brooks was a five-time first team All-Pro and 11-time Pro Bowl selection in 14 NFL seasons. The 2000s All-Decade team member was the co-leader with Warren Sapp, who is a first ballot Hall of Famer this year, of one of the best defenses in the last 20 years. The Buccaneers were ranked in the top 10 in both scoring defense and total defense for nine straight seasons (1997-2005). In the Tampa 2 defense, Brooks was the ideal weakside linebacker who excelled in coverage and space. He was named the NFL’s Defensive Player of the Year in 2002 when he led all linebackers with five interceptions for 218 return yards (third in the NFL) and three touchdowns (first in the NFL) while playing on a defense that was ranked first in both scoring defense and total defense.

The Buccaneers also had the only Super Bowl victory in franchise history that season. It will be hard for the Selection Committee to justify putting Sapp in on the first ballot while denying Brooks in his first try given the two players were equally important to Tampa Bay’s defensive success. 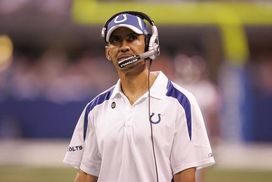 ICONDungy qualified for the playoffs in a staggering ten consecutive seasons.

In 13 years as a head coach, Dungy had a 139-69 record with only one losing season. He transformed the Tampa Bay Buccaneers from a perennial losing franchise to a consistent playoff team with his Tampa 2 defensive scheme. Dungy became the first African-American head coach to win the Super Bowl with the Indianapolis Colts’ victory over the Chicago Bears in Super Bowl XLI. He retired in 2009 after a record setting 10th consecutive playoff appearance. Dungy was one of two head coaches named to the All-Decade team for the 2000s. Only three head coaches—Tom Landry, Chuck Noll and Don Shula—have been inducted into the Hall of Fame in their first year of eligibility since 1990. Dungy likely falls short in his first Hall of Fame attempt, just like Bill Walsh, despite his historical significance as a head coach.

Harrison was named first team All-NFL six times and elected to eight Pro Bowls during his 13-year NFL career. He was a first team wide receiver with Randy Moss on the 2000s All-Decade team. Harrison ranks third in NFL history with 1,102 receptions, seventh with 14,580 receiving yards and fifth with 128 receiving touchdowns. He set the NFL single season record for receptions in 2002, with 143. The next closest single season total is 123 receptions.

Harrison was the first NFL player to have three consecutive 1,500 receiving yard seasons. Although there isn’t a limit each year on the number of inductees at a position, Harrison faces competition from Tim Brown, a four-time finalist, and Andre Reed, a seven-time finalist. Unlike Harrison, Brown and Reed weren’t named first team All-Decade. The selection committee isn’t supposed to consider off the field issues, but Harrison was a person of interest in a 2008 Philadelphia shooting involving a gun he owned. Five wide receivers have been first ballot Hall of Famers, with Jerry Rice as the most recent in 2010. Harrison has an excellent chance of becoming the sixth.

Jones was a six-time All-Pro and nine-time Pro Bowler in 12 NFL seasons. A good case can be made that Jones was the best offensive lineman of the 2000s. If the distinction doesn’t belong to Jones, then it goes to Jonathan Ogden, who was selected to the Hall of Fame in 2013 during his first year of eligibility. Jones and Ogden have similar resumes. The two players are the first-team tackles on the All-Decade team for the 2000s. However, one difference is that Jones doesn’t have a Super Bowl ring like Ogden.

Jones’ lone Super Bowl appearance came in the 2005 season when the Seattle Seahawks lost to the Pittsburgh Steelers in Super Bowl XL. Recent selection trends favor offensive lineman. An offensive lineman has been elected to the Hall of Fame in seven of the last eight years. If the Selection Committee applies the same standard to Jones as they did with Ogden, then Jones should be inducted in 2014, unless winning the Super Bowl carries significant weight.