Could Chicago host a Super Bowl?

Asked about that possibility by NFP, a Bears spokesman said it would wait to see how things go in New York.

The NFL has responded with a similar blanket statement after several northern cities with open-air stadiums inquired about landing the ultimate game, following the announcement that New York would be this year’s host.

But whether or not the 2014 Super Bowl is successful, a future Super Bowl taking place in Chicago is doubtful.

“There are so many reasons why Chicago is strong,” said Marc Ganis, president of SportsCorps Limited, a leading sports business consulting firm, which has worked on stadium projects related to more than half of the NFL teams. “But its fatal flaw is very likely the facility, and that presupposes that the league chooses to go to northern open-air cities on a regular basis.”

Oakland’s dilapidated O.co Coliseum is the only NFL stadium with a smaller seating capacity than Chicago’s Soldier Field, which can hold just 62,000 and lacks an open end zone that could expand capacity by a sizable amount.

“Its constraints make it very difficult to make it Super Bowl-ready,” Ganis said. “It would take a major capital cost to make Soldier Field Super Bowl-eligible.”

Lucas Oil Stadium, the home of the Colts, hosted the Giants’ win against the Patriots in 2012 and drew rave reviews from both the NFL and its fans despite having a small stadium. Lucas Oil has a usual capacity of about 63,000, but that was increased to 68,000 for the game, and it has the benefits of a retractable roof to protect those attending from the elements. 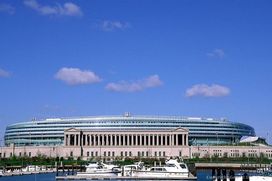 Soldier Field’s issues haven’t stopped Chicago politicians, particularly Mayor Rahm Emanuel, who discussed a Chicago Super Bowl with Commissioner Roger Goodell during the summer, from pushing for it, but that has been as much about creating headlines as realistically landing the game.

“The city itself would be extraordinary,” said Ganis, who resides in Chicago.

But New York, the media capital of the world and the largest and wealthiest city in the United States, was chosen because it had a new 82,000-seat MetLife Stadium, which was funded by the Giants and Jets, and to further boost the city as an attraction post-9/11.

“There is a compelling story line to why New York,” Ganis said.

Even if the NFL decides to move the ultimate game to more northern open-air stadiums, other cities would take precedence over the Windy City.

The case for D.C. and Denver

Both Washington, D.C. and Denver likely would serve as more enticing spots than Chicago.

The Redskins’ FedEx Field is mammoth. In 2010 it had more than 90,000 seats with ample club-level seats, luxury boxes and a large parking facility. The nation’s capital also features three airports and easy access to its stadium. 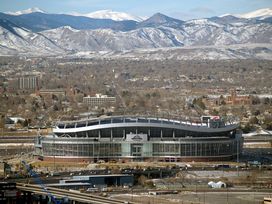 Sports Authority Field in Denver could be on the NFL's radar as a future Super Bowl site.

Denver would allow the NFL to expand its game to the Rockies, a desirable setting because only 16 of the 47 Super Bowls have taken place west of the Mississippi River.

Sports Authority Field at Mile High has a 76,125-fixed seat capacity. And there is a sentimental factor as rumors have swirled that respected Broncos owner Pat Bowlen, who will turn 70 in February, is having health issues.

But — as noted by the Bears — before the NFL seriously considers other cold weather cities with open-air stadiums like Washington, Denver, Chicago, Boston or Philadelphia, this year’s Super Bowl will have to go off well.

XLVIII will be deemed a success if there are no logistical problems, meaning the transportation, hotels and security operate without hitches.

The NFL will evaluate how the sponsors, networks, fans and the media respond to the NYC environs.

Perhaps the most crucial factor will be the weather. Although having the elements in play might make it fun, the NFL wants to be sure that it doesn’t hurt the action on the field or other Super Bowl-related activities.

This year already has taken on a different and distinctly urban feel. Instead of pondering which Super Bowl party to visit, the focus has been on where to make restaurant reservations and which Broadway shows to see.

How that atmosphere plays out during the Super Bowl, which is more about the week-long event than the game itself, could affect Chicago’s future chances.

The NFL announces Super Bowl host cities during the spring meetings in May. Indianapolis, Minneapolis (which is slated to have a new stadium by then) and New Orleans are rumored to be the favorites for LII in 2018.

If Chicago gets the chance to host a Super Bowl, it won’t be for a while.

“There are a quite a few others ahead of it. You need to go back to warm weather climates and then you also have some new stadiums coming,” Ganis said, “which the league likes to reward.”