Despite inching closer to a winless season, the Indianapolis Colts have gotten some positive news. 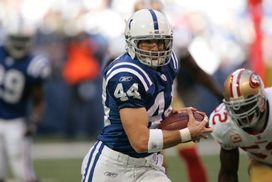 ICONDallas Clark is expected to start Sunday for the Colts.

According to Phillip B Wilson of The Indianapolis Star, Colts tight end Dallas Clark--who's been out since suffering a fibula injury in Week 9 against the Atlanta Falcons--returned to practice Wednesday and was a full participant.

It marks the first time Clark has practiced fully since November 6th.

The injury initially generated some concern that the former first-round pick from Iowa would be placed on injured reserve, but he appears close to a return. A few weeks ago, Colts head coach Jim Caldwell noted that Clark is a notoriously quick healer and he appears ready to return soon.

In nine games this season, Clark has managed 287 yards and two touchdowns on 28 receptions.