Dear Bills: it's not the refs, it's your coach

"No Goal" ruined sports for a lot of us in Buffalo. I imagine Lakers-Kings Game 6 did the same for Sacramento. When you've been legitimately, provably screwed over by officials, it changes you. You watch every game with a little zebra-clad devil on your shoulder telling you it's happening to you again. I get it. That isn't what happened in Denver Sunday. 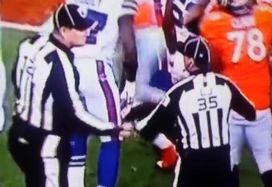 #BillsMafia erupted after refs, who were working together to determine if C.J. Anderson got the ball past the plane or not, fistbumped after declaring it a touchdown. Sure enough, the aformentioned devil was right there telling me it was happening again. They're out to get us! The world hates Buffalo! We could have been the next New York City if railroads hadn't replaced canals! Homerun throwback! No goal!

Saftey Aaron Williams didn't help matters on Twitter when he said "No excuse for my performance but we can’t win playing 16 vs 11" This all, tragically, misdirected our rage away from the real problem, Doug Marrone.

For almost two quarters of football, Jerry Hughes, arguably your 2014 Bills' MVP, sat on the sidelines. It was originally reported that it was due to an unsportsmanlike conduct penalty, and they wanted to make sure he "cools down". Hughes cooled down alright, sitting in the cold Denver air for 24 of the next 36 snaps. All this could still be explainable, if the head coach actually knew about it! That's right. Marrone, in the most meaningful game of the season, did not know that his best defensive player was not on the field for almost two quarters of football.

Add to this, his decision to punt on 4th-and-2 while down two scores with five minutes left, and you have, yet again, beaten yourself. There is a laundry list of these decisions in every Bills' loss this season. He has lost them all for you. There's a little blame to go around. Orton didn't do them any favors sliding for a loss on a 3rd and 1. A lot of poor penalties (are there many non-poor penalties?) and some costly turnovers stacked the deck. But those need to be atoned for by the guy who doesn't have to rely on muscle memory or split second decisions or the calls of imperfect officials. He needs to make the right choices, and he can't. He just can't.

I wrote about it in the beginning of the year, and I am more convinced than ever: he is just not ready to be an NFL coach. He is grossly unaware of clock management, in-game probabilities, and the relatively simple task of being aware of who is actually on the field. He could probably be a great assistant, where he can focus on one area. He could probably return to Syracuse and be as mediocre as he left. But you can't correct these deficiencies. They are either things that you inherently understand, or you don't. And until it's changed, the Bills aren't going to have a chance of being legitimately screwed in something as meaningful as a playoff game.