This isn’t going to be a pious rant about how NFL players should be “role models”. I’m under no such delusion.

This isn’t an expression of faux outrage at the Dolphins' organization or a commentary on bullying in America.

NFL players are some of the highest earning, most visible, and powerful members of our society. I’m not asking this as a parent. I’m not asking as their coach or GM. As someone who works nearly 60 hours per week to make a fraction of what they make per game, I just need them to do this for me. I need them to grow up. 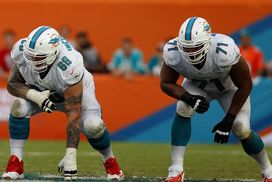 The league is king. I’m never going to walk away from it as long as they keep showing up on Sundays. I just wish they would make it a little easier on us. It’s hard enough to suspend disbelief when I’m told, week after week, that the definition of a catch I’ve known since backyard football is wrong. I struggle, but still manage to turn a blind eye to the absurdity of TV blackouts, the reactive culture surrounding the concussion/CTE link, and the league’s hypocrisy in pretending gambling doesn’t exist. Those things make me angry. But Richie Incognito doesn’t just make me angry, he makes me sad. Sadness and football don’t mix well with me.

We all work with that one guy who doesn’t pick up social cues. He’s the guy you’re surprised still exists, when he uses a racial slur you thought left your life when your grandmother died. He’s the guy who takes the joke a little too far, resulting in that awkward silence and ensuing meeting with HR. He’s the guy who never grew up. Mike Wallace is that guy. Riley Cooper is that guy. Richie Incognito is that guy. In many workplaces, that guy doesn’t last long. He says the wrong thing to the wrong person, and he’s often fired, suspended, or just made to feel like an outcast. In the NFL, I don’t think that guy is alone, and based on how long situations like Incognito’s or bounty-gate are allowed to go on, I don’t even think he’s in the minority. For some reason, even though I’ve known it since I started playing football, that’s a difficult pill to swallow.

I’m not suggesting the league change. I know it’s past that point. Apart from the team-imposed ban from the Dolphins, I’m sure there will be league discipline to follow. I just want these adult men, who consume our attention for roughly half the year, however unrealistically, to just grow up.

The following is an impossibility, but dream with me. As a part of the next CBA, what if it were mandated that the players work a 40-hour offseason week at any minimum wage job? I’m talking about the kind of job that humbles you, checking your ego hour-by-hour, putting life, and your relatively insignificant role in it, into perspective. The kind of job you dread, but need. Working in a late night diner, an oil change pit man, or grocery store shelf stocker all come to mind as jobs I’ve both held and despised, but grown the most from. I worked those jobs through high school, during, and after college, side-by-side with people of different races, sexual orientations, and educations. Those jobs force you to see people in every walk of life as your equal. Your existence as a member of the human race is put into focus. Because at the end of the day, you’re making next to nothing for doing the same grunt work as everyone else. Maybe my idea doesn’t solve a thing, but I’d feel a lot better knowing that, even for just 40 hours, someone like Richie Incognito would know what it’s like to be on our end of this ridiculous spectacle.

Human empathy 101 is a life lesson that some players have clearly missed, having only known the cultural bubble of the gridiron as a workplace. Incognito isn't just a bully. He's "that guy". He ignorantly, and without cause, thinks he is a better human being than Jonathan Martin. He lines up next to him every week, takes the same punishment down after down, and still has the nerve to think he is superior to him. I don't need these players to start charities or win the Nobel Prize. But to justify the time I invest in consuming the NFL product, I just need them to act like human beings.