Did the NFL lie about why it pushed the draft to May?

Normally, at this time you’d be scouring the Internet for draft grades of your favorite team. Instead the NFL pushed back this year’s NFL Draft two weeks later and into May.

NFL Commissioner Roger Goodell said that the 2014 NFL Draft was moved because of a scheduling conflict at New York’s Radio City Music Hall, which hosts the draft.

"At this late stage, for us to do it the right way,” Goodell told ESPN.com last year, “we don't see having any choice but to move the date.”

The NFL reaffirmed to NFP last week that a Radio City show was the reason for pushing back the draft to May 8-10.

But that show, Hearts and Lights, was recently postponed until 2015 for what were deemed “production issues,” according to someone at MSG Entertainment, who scoffed at the notion of its show causing the scheduling change to this year’s draft.

Hearts and Lights — a Rockettes dance-based production that tells the story of two teenage cousins traversing the sights of New York while trying to decipher their grandmother’s past — was slated to run 59 times from March 27 to May 4.

Asked if the NFL was upset that the very program that forced the draft to May was postponed, a league spokesman declined comment.

Although Radio City could potentially make more money by hosting its own production for five weeks rather than a three-day event, the NFL — with about $10 billion in revenue — would seemingly have the power to get its way, and the draft draws enormous ratings.

ESPN’s coverage of the first round of the 2013 NFL Draft averaged 6.2 million viewers, according to the Nielsen Company, and that doesn’t even include NFL Network numbers.

Rather than being forced to May by a Rockettes show, it seems plausible that the NFL wanted to spread out the NFL calendar. 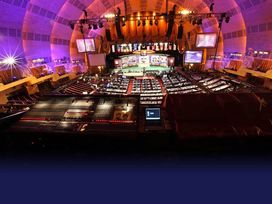 New York City has hosted every NFL draft since 1965.

With the Super Bowl and NFL Scouting Combine in February, the hot stove of free agency in March, the schedule release in April, the draft in May, training camp in July and preseason in August, June is really the only month without major football news, and even that has minicamps.

But if reducing the NFL “offseason” was the reason for the change, one would think the NFL would’ve stated so.

And if the Hearts and Lights show wasn’t the true motive for the May draft, coming up with such a bizarre excuse would seem like a bad public relations move for a league known to be incredibly savvy in that area. (Goodell has his roots in PR.)

Another possible incentive to have the draft in May is May Sweeps, whose numbers are crucial to advertisers. As a result companies could be willing to spend even more money to run their commercials on ESPN and NFL Network.

Whatever the reason for having the draft in May, it could have negative consequences:

• Paranoid coaches worry that their rookies will be affected. With less time before training camp and the regular season to learn the schemes and acclimate themselves to the NFL, first-year players could make less of an impact — or so some teams might fear.

• Given the already overly extensive and thorough draft research that has taken place, additional weeks could result in overkill. One prominent agent told The Charlotte Observer that NFL teams would overthink things to such an extent that they would likely suffer paralysis by analysis where they talk themselves out of a prospect.

• The true losers of a potential move and the ever-shortening time frame are the coaches, scouts and club officials. Already overworked in the 24/7 league, they have even less vacation time in May and June — traditionally a slow time in the NFL calendar.

Having the NFL Draft in May is not unprecedented. The entire 1984 draft took place in May, though it was not the major event that it is today.

But with Hearts and Lights slated to run in spring of 2015, the NFL likely will face the April/May dilemma next year.

Although the NFL needs union approval in order to change the start of the league year, Goodell has the power to alter the dates for the draft and combine without consulting the players’ union.

NFP also has learned that it remains unclear where the draft will take place in 2015. Even the setting of New York, which has hosted the draft in every year of the Super Bowl era, is up in the air. (The last year the draft was outside of the Big Apple was in 1964 in Chicago.)

One thing the league assured NFP is that the 10-minute, seven-minute and five-minute time limits for rounds one, two and three-seven, respectively, will remain unchanged.

Also don’t look for the league to go back to the two-day, Saturday-Sunday format. While entering the fifth year of the primetime Thursday start, television ratings, Internet page views, numbers of players on hand and sponsorship involvement have increased.

If anything, the NFL might extend the days of the draft, as rumors have swirled it could make the draft a four-day event.

Only time will tell whether the NFL Draft will return to April in 2015 or whether the leggy Rockettes will once again kick it to May.