Gerald McCoy became the NFL’s highest-paid defensive tackle (using average yearly salary) by signing a six-year, $95.2 million contract extension (worth up to $98 million through salary escalators) with the Tampa Bay Buccaneers before the team’s Week 8 contest against the Minnesota Vikings. The previous benchmark was Ndamukong Suh’s five-year rookie contract with the Detroit Lions worth a maximum of $68 million (includes $40 million guaranteed). The five-year, $61 million contract (with $35 million guaranteed) Haloti Ngata received from the Baltimore Ravens in 2011 was the top veteran deal for an interior defensive lineman.

McCoy’s deal contains $51.5 million in guarantees. It is the second-largest amount of guarantees ever in an NFL contract for a defensive player behind J.J. Watt’s $51,876,385. 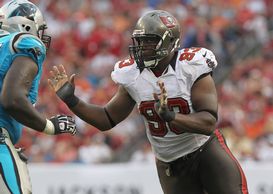 Interestingly, the Buccaneers are paying McCoy in the first two years of the deal like he played out his contract and was franchised in 2015 for $18,392,704. He is making $31.5 million as opposed to $31,124,957 through 2015 with a franchise tag. McCoy’s $44 million in the first three years (through 2016) ties Ngata for the best three-year cash flow among interior defensive linemen.

McCoy’s deal should set the floor for Suh, who is scheduled to become an unrestricted free agent after the season. It is nearly impossible for the Lions to franchise Suh in 2015 because his franchise tag number will be $26.87 million, which is based on 120% of his 2014 cap number. McCoy, who was taken immediately after Suh as the third overall pick in the 2010 NFL draft, getting an 18.4% increase over the average salary of his rookie contract will likely confirm to Suh that a decrease from the $64.625 million he’s earning in the five years of his rookie contract isn’t warranted. With a similar percentage increase as McCoy, Suh’s next deal will average approximately $15.3 million per year and could set a new standard for guarantees in defensive player contracts.