J.J. Watt became the NFL’s highest paid non-quarterback (using average yearly salary) by signing a six-year, $100 million contract extension with the Houston Texans Monday evening. The previous benchmark was the seven-year extension averaging $16,207,143 per year Calvin Johnson received from the Detroit Lions in 2012. Watt had two years remaining on his contract with $1,907,385 and $6.969 million salaries this year and next year.

The 2011 first round pick’s contract contains $51,876,385 million in guarantees, which is a record for defensive players. It eclipses the $50 million of guarantees in the six-year, $96 million contract (includes an additional $4 million in Not Likely To Be Earned Incentives) Mario Williams signed with the Buffalo Bills in 2012 that made him the NFL’s highest paid defensive player. Calvin Johnson’s $53.25 million guaranteed (includes his $4.5 million second day of the 2012 league year roster bonus) is the most ever for a non-quarterback. 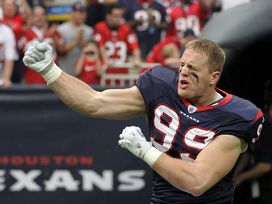 No player has recorded more sacks (31) over the last two years than Watt.

Watt’s three-year cash flow of $41,376,385 is less than the other top non-quarterback deals. Williams, Johnson and Larry Fitzgerald are at $53 million, $51.75 million and $45.5 million, respectively. This is understandable because Watt had two years remaining on his contract, unlike the others. Williams was an unrestricted free agent while Johnson and Fitzgerald were entering contract years.

Interestingly, Watt’s cash flow is substantially better than if he had played out his contract and received franchise tags in 2016 and 2017, which Texans owner Bob McNair mentioned as an option during negotiations, despite the team having leverage. Assuming the cap has a similar percentage increase to this year (8.13 percent) in each of the next two years, it will be approximately $156 million in 2016. Watt’s franchise tag in 2016 would have been right around $16.085 million with these cap projections. A second franchise tag in 2017 would have been $19.302 million, a 20 percent increase over Watt’s 2016 franchise number. Watt is making $51,876,385 through 2017 instead of $44,263,385, a $7.613 million difference, with the franchise tag scenario. More specifically, Watt gets a $9 million raise this year and $22 million more through 2015 than under his rookie contract.

The biggest beneficiary of Watt’s new deal could be fellow 2011 first round pick and St. Louis Rams defensive end Robert Quinn (14th overall). It’s conceivable that Watt’s reign as the NFL’s highest paid non-quarterback could be short lived if Quinn has a comparable or better season than in 2013 when he registered 19 sacks.