The Denver Broncos signed offensive tackle Ryan Clady to a five-year, $52.5 million contract (with an additional $5 million in base salary escalators) before the July 15 deadline for franchise players to sign long term deals. Clady, whose deal averages $10.5 million per year, was the only one of eight NFL players given a franchise tag that got a multi-year contract.

Clady was designated a franchise player by the Broncos this year after rejecting a five-year, $50 million contract offer (with $28 million in guarantees) before the 2012 season because he wanted a deal comparable to Joe Thomas’ contract. Thomas signed a seven-year contract extension averaging $11.5 million per year (including $37 million in guarantees and an additional $3.5 million in Pro Bowl escalators) with the Cleveland Browns in 2011.

The maximum value of Clady’s contract is $57.5 million. The $5 million in base salary escalators are predicated on Clady being named first team All-NFL or All-Pro during the deal. The base salaries in the remaining contract years escalate by $500,000 with one All-NFL/All-Pro selection. They escalate by an additional $1 million with his second All-NFL/All-Pro selection. 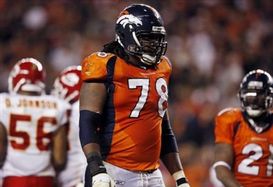 Clady may not receive the escalator money in the latter years of the contract even if he hits the escalator benchmarks. The escalator amounts do not become guaranteed when earned and they are lost if Clady is released. The Broncos would pick up significant salary cap room by releasing Clady in 2016 or 2017 because there is only $600,000 of signing bonus proration in each year of the deal.

Running back Michael Turner is a perfect illustration of this concept. He earned $1.4 million in 2013 base salary escalators during the first five years of the contract he signed with the Atlanta Falcons in 2008. The Falcons released him in March because his escalated $6.9 million salary was too much for a 31-year-old running back on the decline. The Falcons have a $2 million cap charge this season for Turner. He would have counted $8.9 million on Atlanta’s cap if they had kept him on the roster at his full 2013 salary.

Clady could have accomplished the same thing as the escalators through not likely to be earned incentives (NLTBEs), but with better security because incentives are typically payable during the offseason following when they are achieved. One possibility would have been a $2 million NLTBE for the first selection and a $3 million NLTBE with his second selection. In order to qualify as a NLTBE, the All-NFL/All-Pro honor would have to be tied to a team incentive. All-NFL/All-Pro by itself would be a likely to be earned incentive, which would count against the cap, because Clady was named first team All-Pro by the Associated Press in 2012. His 2012 first team All-Pro selection was the second of his career, with the first such honor occurring in 2009.

Russell Okung may be the next offensive tackle to sign a deal in Clady’s neighborhood. Although Okung’s contract doesn’t expire until after the 2015 season, the Seattle Seahawks have been fairly pro-active in extending the contracts of core players before they reach free agency.