K.C. synergy: how the Royals have bolstered the Chiefs

Before taking questions during his Sept. 25 press conference, Chiefs coach Andy Reid made a declaration, and the theme would become a regular staple of his media briefings throughout the late fall.

“I’m wishing the Royals good luck,” Reid said. “Skipper (Ned) Yost, man, we’re pulling for you and your guys, and I know the whole city is.”

The Royals and Chiefs are connected.

After all, they’re literally closer than almost all professional sports teams who share the same city. 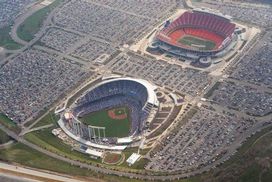 Part of the Truman Sports Complex, Arrowhead Stadium and Kauffman Stadium are neighboring facilities. They share parking lots, and both teams train in the complex — unlike many pro teams that practice in one area of the city and play in a stadium across town.

“Guys have been out to a bunch of practices and vice versa,” quarterback Alex Smith said. “(The Royals) have had us up to some games.”

One day before the Royals played in their first postseason game in 29 years, several Royals, including Billy Butler, Eric Hosmer, Mike Moustakas and James Shields, attended the Chiefs’ Monday Night Football game against the Patriots and even made appearances on ESPN’s Monday Night Countdown.

First baseman Hosmer, anxious and excited about making his postseason debut the next night, told USA TODAY: “Hey, we’re not going to be able to sleep anyways.”

Buoyed by a boisterous Kansas City crowd — further energized by the Royals’ ensuing playoff appearance, the first since 1985 — the Chiefs throttled the favored Patriots 41-14. The Chiefs’ win before a nationally televised audience was the team’s biggest victory in years.

Then on the following night, the Royals, who trailed the A’s 7–3 after seven innings in the wild-card, won that thrilling 12-inning contest to ignite a record eight-game postseason winning streak. The amazing comeback by a team, which sat in third place in the AL Central in late July, was part of a magical season for the Royals.

Similarly, the Chiefs, who started 0-2, evened their record by defeating the Patriots and went on to win four of their next five games, firmly placing them in playoff contention and making them one of the hotter teams in the NFL.

The parallels between the teams extend to their playing styles.

The Royals, who finished last in the majors in home runs with just 95, employed small ball. They succeeded in 2014 because of their speed, sacrificing base runners over and stealing bases to compensate for their inability to hit the ball over the fence.

The Chiefs, despite playing in a passing-friendly era, are not an explosive home-run team. None of their wide receivers have caught a touchdown this season. The longest pass play for the Chiefs is 34 yards; every other team has had a pass play that went farther. Ranked 29th in the league in passing entering Week 10, the Chiefs have gained their yardage in small chunks through the run and short passes.

But give the 2014 Chiefs a lead — just like the Royals — and they become a nightmare for opponents. 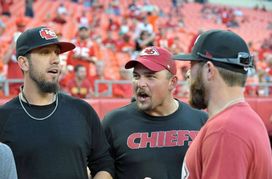 If the Royals led after six innings, the opposition was toast. Kansas City would turn the game over in the seventh, eight and ninth innings, respectively, to flamethrowing relievers Kelvin Herrera, Wade Davis and Greg Holland — who each recorded ERAs under 1.50 in 2014. No other team has ever had two relievers — let alone three — post such low ERAs while appearing in more than 60 games.

With a lead late in the game, the Chiefs don’t have to worry about their anemic passing game and they can rely on their two-headed monster in the running game — Jamaal Charles and Knile Davis, who have paced the Chiefs to the sixth best rushing ranking in the league, heading into Week 10.

Kansas City not only has the personnel to hammer a defense and grind out clock, but they are not a defense a trailing team wants to face.

If the opposition is forced to throw on every down to catch up, Justin Houston, who leads the NFL with 12 sacks, will pin his ears back and tee off on the quarterback. Focus the blocking on Houston, and linebacker Tamba Hali, who has 77.5 career sacks, will apply the pressure.

Making both Houston and Hali’s jobs easier is 346-pound Dontari Poe. One of the best pass rushing nose tackles in the league, he gives the quarterback no place to step up in the pocket and avoid the linebackers coming of the edge.

These assets combined to thwart the Patriots during that Sept. 29 game. Down 17-0 at halftime, the Patriots were forced to throw. That played right into the hands of the Chiefs’ pass rushers, who were aided by the frenzied, Royals-playoff-ready crowd.

The Chiefs sacked Brady three times, and the offense rushed for more than 200 yards.

About a month later, the Chiefs followed the Royals’ World Series run. Smith attended Game 1. Reid had the contest on in the background while he broke down film of the Rams.

The Royals enjoyed a great ride, though they ultimately lost to the San Francisco Giants in seven games.

“I’m proud of the Royals and the job that they did this year,” Reid said. “It’s awesome.”

The Royals, who entered the postseason as a wild-card, ended the longest playoff drought in Major League Baseball, reaching the big stage for the first time since George Brett led them in 1985.

Though the Broncos likely will lock down the AFC West, the wild-card looks like a possible postseason route for the Chiefs. Once there, they would aim to win a playoff game for the first time since Joe Montana quarterbacked Kansas City to a 28-20 victory against the Houston Oilers in 1993.