According to John Dickinson of 95.7 The Game radio, Oakland Raiders running back Darren McFadden conducted a "light" workout off to the sidelines in practice on Monday. 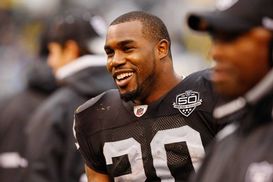 ICONIt looks like Darren McFadden is finally starting to get healthy.

It was a brief workout that consisted of mostly walking, but it is the first time McFadden has been on the field since he suffered a foot injury on October 23rd.

Raiders head coach Hue Jackson suggested last week that the former Arkansas Razorback will likely be eased into the lineup upon return.

"It’s hard to come back when you’ve been gone that long to just hit the ground running," said Jackson.

Prior to his injury, McFadden had been one of the most explosive offensive performers in the league, rushing for 614 yards and four touchdowns with 154 yards receiving and one receiving touchdown in seven games.

At this time, Michael Bush -- who's done well as a starter thus far -- is expected to draw another start against the Miami Dolphins this week, as Jerry McDonald of The Contra Costa Times does not expect Darren McFadden to return for the week 13 matchup.