Polamalu could miss some time with head injury

The Pittsburgh Steelers may be without former Defensive Player of the Year Troy Polamalu in Week 13 due to a head injury, according to ESPN's Adam Schefter. 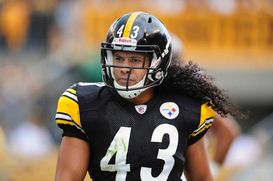 ICONPolamalu could be headed to the shelf for Week 13.

The Southern California alum suffered a head injury in Week 6 against the Jacksonville Jaguars, but was cleared to play the following week.

It appears getting clearance won't be so easy this time.

"I think it could be a bit before we see Polamalu again," concluded Schefter.

Troy Polamalu has remained productive in 11 games this season, notching 64 tackles, one sack, one fumble recovery, one touchdown and seven pass breakups.

The good news is the Steelers expect outside linebacker LaMarr Woodley--who's been dealing with a hamstring issue--to return this week against the Cincinnati Bengals, according to Jason LaCanfora of the NFL Network.