The rookie wage scale implemented after the lockout in 2011 drastically reduced salaries at the top of the NFL Draft. Sam Bradford, the 2010 first overall pick, signed a six-year contract worth a maximum of $86 million with $50 million in guarantees. Cam Newton signed a fully guaranteed four-year, $22,025,498 deal, including a $14,518,544 signing bonus, as 2011’s top pick. All deals for draft choices are four years under the new rookie wage scale.

The rookie wage scale is essentially a salary cap within the overall salary cap, which sets a league wide limit on the total amount of compensation for rookies. Each pick in the draft has a salary floor and ceiling in the first year and over the four years of the deal. Teams have maximum and minimum amounts that can be spent on their picks based on draft position.

The salary components of a deal are restricted to signing bonus, base salary, roster bonus, reporting bonus, workout bonus and select incentives. A majority of picks have only signing bonuses and base salaries in their deals.

An extremely important aspect of these deals is the first year cap number (typically prorated amount of signing bonus and minimum base salary) because it helps determine the overall value of deal. The maximum annual increase in each of the four years of the deal is 25% of the first year cap number. For example, Newton’s cap numbers increase by $1,001,159 in each year of his deal. Since all of these deals have minimum base salaries in the first year, the remainder of the contract is derived within these constraints. The deals can’t be renegotiated until the conclusion of a player’s third regular season. The earliest Newton’s contract can be renegotiated is when the 2013 regular season is over.

Teams have an option for a fifth year with first round picks that must be exercised after the third year of the deal. The fifth year is guaranteed for injury when the option is exercised. It becomes fully guaranteed if the player is on the team’s roster at the start of the fifth league year. The fifth year salary for the top ten picks is the transition tender (average of the ten highest salaries) for a player’s position in the fourth year of his contract. Assuming the Carolina Panthers exercise their option after the 2013 season on Newton for a 2015 contract year, his salary will be the 2014 quarterback transition tender. That number is currently $13.608 million. The fifth year salary of the rest of the first round (picks 11-32) is the average of the third through 25th-highest salaries at a player’s position.

Third through seventh round picks have a base salary escalator for their fourth year based on participating in a minimum of 35% of the offensive or defensive plays in two of the first three seasons of their deals or an average of at least 35% playtime in their first three seasons. The base salary will equal the lowest restricted free agent tender in the fourth year. The 2014 salary for 2011 third through seventh round picks that earn the escalator is projected to be $1.389 million. 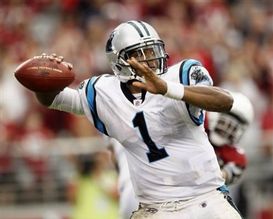 Cam Newton's four-year rookie deal is worth just under $23 million.

The escalation of rookie salaries from one draft class to the next has been minimal since the rookie wage scale was implemented because increases are tied to the growth of the cap. The cap went up by 1.99% ($120.6 million to $123 million) this year while the first year minimum salary for rookies increased by 3.85% ($390,000 to $405,000). There is a freeze on signing bonuses for draft picks because the growth in minimum salary outpaces the growth of the cap. The same thing also occurred last year. As a result, 2013’s top pick (OT Eric Fisher) will receive the same signing bonus as Newton and Andrew Luck, the first overall picks in 2011 and 2012, respectively.

Deals are signed at a much quicker pace under the new rookie wage scale. Prior to its implementation, most rookie deals were completed in July as training camp approached. The Chicago Bears were the first team to sign draft picks by getting fifth-round pick Jordan Mills and sixth-round pick Cornelius Washington under contract. Chicago’s second-round pick, WR Alshon Jeffery, was the first player to sign last year (May 2). Holdouts are also largely a thing of the past because the rookie wage scale sets specific parameters of the deals.

Here’s a look at a select group of expected first and second round deals. Ranges are given for the third and fourth round deals. The median is used for the remainder of the draft. Important considerations or issues relating to the deals are highlighted.

The entire deals of the first half of the first round were fully guaranteed in 2012. The first seven picks didn’t have offsets with their guarantees. Ryan Tannehill, the eighth pick, has offsets while Luke Kuechly, the ninth pick, doesn’t. An offset clause allows a team to reduce the guaranteed money owed to a player when he is released by the amount of his new deal with another club. Without an offset, the player receives his salary from the team that released him in addition to the full salary from his new contract with another team.

All of the deals in the second half of the first round were guaranteed for the first three years. The 16th through 24th picks had either had a portion of their fourth year base salaries guaranteed and/or received lower base salaries with early roster bonuses (third to fifth day of the 2015 league year). The Detroit Lions didn’t include offsets in Riley Reiff’s (No. 23) guarantees. Reiff was the lowest pick without offsets. Shariff Floyd will expect the same treatment from the Minnesota Vikings as this year’s 23rd pick.

At least the top three picks in the second round should have a portion of their third year base salaries guaranteed. Geno Smith could also get a third year guarantee since second round quarterbacks (Colin Kaepernick, Andy Dalton and Brock Osweiler) have gotten some sort of premium with guarantees under the rookie wage scale.

The third round picks are the first draft choices that do not receive the full 25% annual increases in their deals. Travis Kelce, the first pick in the third round, will get a $703,304 signing bonus in his deal with the Kansas City Chiefs. His contrac t will be worth approximately $3.16 million. The exact value will depend upon how close he gets to his maximum annual increase. Zavier Gooden, the last pick in the round, should receive a four-year, $2,666,016 deal with a $506,016 signing bonus from the Tennessee Titans. 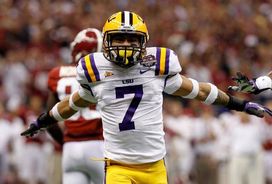 Tyrann Mathieu's off-the-field issues should make for a compelling negotiation between player and team.

The most intriguing negotiation in the third round will come between cornerback Tyrann Mathieu and the Arizona Cardinals. The Cardinals want him to sign a contract without guaranteed money because of his drug problems. Under the Cardinals’ structure, Mathieu’s deal would contain roster bonuses instead of a signing bonus, which would protect the team in case Mathieu’s drug problems reoccur. The Rams were unsuccessful in getting Janoris Jenkins, their second round pick last year, to accept an unconventional structure because of his off-the-field problems. Mathieu’s deal should have a $662,500 signing bonus.

Beginning in the third round, negotiations involve discussions of a split contract where a player receives a lower salary when he isn’t on the 53-man roster. Generally, there are two types of splits. With a preseason split, a player will get the lower amount if he is placed on injured reserve before the start of regular season. Once a player makes the 53-man roster, the lower salary is void. If a player has a full or up-down split, he will receive the lower amount anytime he isn’t on the 53-man roster and the higher amount when he is on it.
The type of split will depend upon a team’s conventions and the player’s leverage. Third round picks usually only have a split in the first year of their deals. The split amount for rookies in 2013 is $288,000.

Every deal from the fourth through the seventh rounds will only contain minimum base salaries. The difference in the deals will be the amount of the signing bonus—which gradually decreases with each successive pick—except compensatory picks at the end of rounds receive the same signing bonus. Most fourth-round deals will have splits in the first two years.

From the fourth round through the rest of the draft, most negotiations will include discussions on tying a player’s base salary to his credited seasons. A player earns a credited season with three or more games on the 53-man roster during a season. For example, if Toilolo spends his entire rookie season on injured reserve, his 2014 base salary will be $420,000 (next year’s rookie minimum salary) instead of $495,000. His base salaries in the other years of the deal will be affected as well because of the missing credited season. Fourth round picks typically only have their second contract year’s salary tied to credited seasons. At most, two years of salaries will be tied credited seasons as the draft progresses, but it’s determined by the team’s practices.