The St. Louis Rams signed pass rusher Robert Quinn, who was under contract through the 2015 season, to a four-year contract extension averaging $14,253,724 per year before Week 2’s contest against the Tampa Bay Buccaneers. The 2011 14th overall pick was scheduled to make $1,661,734 and $6.969 million this year and next year, respectively, prior to signing his palindrome-filled deal. 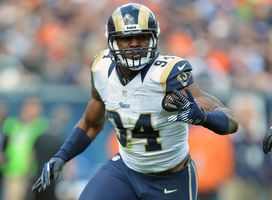 Quinn ranked second in the NFL in sacks last season with 19.0.

The deal makes Quinn the NFL’s third-highest paid defensive player (using average yearly salary) behind only J.J. Watt ($16,666,667 per year) and Mario Williams ($16 million per year). Quinn’s three-year cash flow of $31,473,906 is less than Patrick Peterson ($14.05 million per year) and Richard Sherman’s ($14 million per year), the NFL’s fourth and fifth-highest paid defensive players. Peterson, who also had two years remaining on his rookie contract, and Sherman are at $37,969,111 and $35 million over three years, respectively. The discrepancy with Peterson, the fifth overall pick in 2011, is partially because of his option salary being this year’s cornerback transition tag ($10.081 million), while Quinn’s was the average of the third through twenty-fifth highest salaries at defensive end ($6.969 million) since he was selected outside of the top ten.

It’s conceivable that Quinn could be in line for another big payday as a 29-year-old when his new contract expires after the 2019 season. Eight-time Pro Bowl defensive end Julius Peppers was 30-years-old when he became the NFL’s highest-paid defensive player with the six-year, $84 million contract (worth a maximum of $91.5 million through incentives) he signed in 2010 to join the Chicago Bears.