The difficulty in trading Jay Cutler

Jay Cutler’s benching for Jimmy Clausen could mean the end of the veteran quarterback’s tenure with the Chicago Bears. Despite the demotion, Cutler’s stated preference is to remain a part of the Bears.

It was presumed that Cutler would be the Bears’ quarterback for the foreseeable future when he signed a seven-year, $126.7 million deal within days of the 2013 regular season ending. Cutler had the NFL’s highest 2014 salary cap number at $22.5 million before the Bears lowered it to $18.5 million by exercising their discretionary right to convert a portion of his base salary ($5 million) into a signing bonus, which was necessary to sign defensive end Jared Allen. Cutler’s $15.5 million 2015 base salary is fully guaranteed. $10 million of his $16 million 2016 base salary becomes fully guaranteed on the third day of the 2015 league year (March 12).

Cutler’s 2015 cap number is $16.5 million. Releasing Cutler before the 2016 guarantee kicks in on March 12 will result in $19.5 million of dead money, a cap charge for a player no longer on a team’s roster. Since Cutler’s guarantees have offset provisions, the Bears would be able to reduce the guaranteed money owed to him by the amount of his new deal with another team. However, the cap relief wouldn’t occur until 2016.

Before releasing Cutler, the Bears would attempt to trade him. From a cap standpoint, trading Cutler is preferable because the Bears would pick up $12.5 million of 2015 cap room. There would be a $4 million cap charge for the Bears from the signing bonus proration in Cutler’s 2016 through 2018 contract years accelerating onto the 2015 cap.

The trading period for 2015 begins when free agency starts on March 10. This doesn’t leave much time for a trade because it would have to occur before the March 12 salary guarantee date if having Cutler return to the team isn’t the organization’s backup plan to a trade.

The Bears won’t be able to get anything comparable to the two second-round picks the San Francisco 49ers received from the Kansas City Chiefs in 2013 for Alex Smith in a Cutler trade, but he should be worth more than the sixth-round pick the Oakland Raiders sent the Houston Texans to acquire Matt Schaub in the offseason. In addition, a team must have enough cap room to absorb a player’s cap number in order to make a trade. Once the player is acquired, the team can then restructure his contract to decrease his cap number. 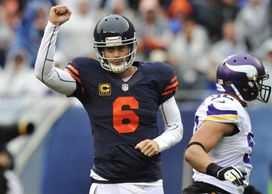 Would it make sense to send Cutler to St. Louis in exchange for Sam Bradford?

Teams aren’t allowed to include cash or cap room in trades under NFL rules. The way around it, which was done when the Jacksonville Jaguars traded Eugene Monroe to the Baltimore Ravens in 2013, is for the team to restructure the contract before the trade by converting salary into a signing bonus. It operates essentially the same way as including cash or cap room because the acquiring team’s cap hit for the player in the current league year is reduced.

This would entail the Bears using the same discretionary conversion rights with Cutler they did prior to signing Allen. If $5.5 million is converted to a signing bonus, Cutler’s 2015 base salary will drop to $10 million. When the trade is made, signing bonus proration from Cutler’s future contract years (2016 through 2019) will accelerate onto Chicago’s 2015 cap. The Bears’ total 2015 cap charge for Cutler will be $9.5 million ($4 million of signing bonus proration from the 2014 restructure and $5.5 million relating to this new restructure), which is still $7 million in cap savings. The acquiring team’s cap charge for Cutler will be $10 million. Eating salary in this manner could be a way for the Bears to increase the compensation received for Cutler.

Although Cutler’s salary guarantees make it harder to trade him, there is a scarcity of quality quarterbacks in the NFL. The team that acquired Cutler would be making at least a two-year commitment to him because of the 2016 salary guarantee. It would be easy for the team to walk away from Cutler after that because the remaining four years for $72.7 million don’t contain any guarantees.

The team that seems to make the most sense to acquire Cutler is the Tennessee Titans. CEO Tommy Smith has vowed to remake the Titans’ roster in the offseason. Rookie Zach Mettenberger, a sixth-round pick this year, hasn’t shown enough for the Titans to know whether he is a potential franchise quarterback.

The Titans are in line for the second-overall pick in the 2015 NFL Draft, which would put them in a position to select 2013 Heisman Trophy winner Jameis Winston, but the franchise may be gun shy about using another high pick on a quarterback with Jake Locker, the eight overall pick in 2011, failing to live up to his potential. Cutler would also have some marketing appeal since he went to Vanderbilt.

The New York Jets are in need of a quarterback because Geno Smith hasn’t proven he’s the long-term solution at quarterback. It’s been a disappointing season for the Jets, but they probably won’t be drafting high enough to have a shot at 2014 Heisman Trophy winner Marcus Mariota or Winston.

Cutler’s contract would help the Jets solve their spending predicament. The Collective Bargaining Agreement requires teams to spend 89 percent of the salary cap in cash over four-year periods of 2013 through 2016 and 2017 through 2020. Jets are 30th in spending this year ($106.295 million) and below the 89 percent threshold since 2013 at 84.56 percent.

Another intriguing possibility could be the St. Louis Rams. Jeff Fisher recently said he would like Sam Bradford, who is missing the entire 2014 season after tearing the ACL in his left knee for the second year in a row, back in 2015. Bradford, who is making $12.985 million on a $16.58 million cap number in 2015, would likely need to take a significant pay cut to return.

The opportunity for a rare quarterback swap exists with Cutler and Bradford. Their salaries and dead money are close enough to each other’s that a trade involving the two of them wouldn’t have much of an effect on either team’s salary cap.

Josh McCown hasn’t performed with the Tampa Bay Buccaneers like he did last year in Chicago while Cutler was injured. Head coach Lovie Smith has called Mike Glennon the team’s quarterback of the future, but doesn’t seem to have much confidence in him. Smith was Cutler’s head coach in Chicago for four years, which could work against him.

The Houston Texans may be a quarterback away from challenging the Indianapolis Colts for the AFC South crown. Cutler would be an upgrade over Ryan Fitzpatrick, who is scheduled to make $3.25 million in 2015. Fitzpatrick could remain with the team as Cutler’s backup with that salary. The Texans won’t have enough cap room to take on Cutler’s contract without restructuring deals or the Bears eating some of his salary unless the 2015 salary cap is above $145 million.

Another alternative could be for the Bears to concentrate on salvaging the situation with Cutler by hiring an offensive-minded head coach that believes he can get the most out of him. Mike Shanahan would best fit that description. Cutler’s only Pro Bowl season was in 2008 under Shanahan.

Joel Corry is a former sports ag ent who helped found Premier Sports & Entertainment, a sports management firm that represents professional athletes and coaches. Prior to his tenure at Premier, Joel worked for Management Plus Enterprises, which represented Shaquille O'Neal, Hakeem Olajuwon and Ronnie Lott. You can email Joel at jccorry@gmail.com.