The Long and short of it 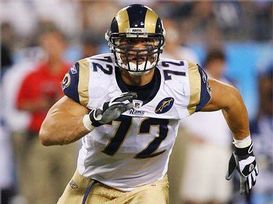 Long is coming off a career-high 13-sack season.

Long is in a worse position financially with the offsets than if he had gotten a signing or option bonus.

For example, if Long was released after the 2013 season from a deal that had $33.2 million in signing and option bonuses with the same $36.76 million over the first three years (with a $2.145 million unguaranteed 2014 salary) and signed a new deal with another club containing $13.2 million of compensation in 2014, this money would be his in addition to the $34.615 million he made in 2012 and 2013. Under this scenario with Long’s actual contract, the offsets would allow the Rams to recoup the $13.2 million salary they guaranteed him in 2014 from his $13.2 million 2014 compensation in his new contract.

Only Dwight Freeney has a higher cap number this season than Long.

It is somewhat surprising that the Rams didn’t structure Long’s extension with a signing bonus, since they aren’t getting any cap relief this season with his deal. Long’s $18,557,500 2012 cap number is the second highest 2012 cap number in NFL behind Dwight Freeney’s $19.035 million cap number, so they had the ability to create significant cap room this season depending upon how big of a signing bonus Long received. Any additional 2012 cap room should have been welcomed by the Rams, since teams can carry over unused cap room from one season to the following season and they have $121,648,321 in salary counting towards next year’s cap when it’s expected to remain relatively flat (approximately $121 million).

The Rams were smart to get Long’s new deal done before the start of the season. With Long having such a high 2012 cap number, it would have been extremely difficult for them to franchise him after the season. Long’s franchise number for next year would have been $22.269 million, which is 120% of his current cap number. If Long had gotten off to a great start this year where he was on pace to duplicate or exceed the 13 sacks he had in 2011 and sustained his production throughout the season, he would have had a tremendous amount of leverage with the Rams during their negotiations.

In order to keep him off the open market, the Rams would have been paying him a premium where he may have become one of the NFL’s highest paid non-quarterbacks.