The offset battle with early first round picks

There are very few negotiable items with rookie contracts under the rookie wage scale implemented after the lockout in 2011. Each pick has a salary floor and ceiling based on draft position. All contracts are four years in length, except teams have an option for a fifth year with first round picks that must be exercised after the third year of the deal.

Contracts are fully guaranteed at the top of the first round. The main issue with these contracts is whether the guarantees will have offsets. An offset clause allows a team to reduce the guaranteed money owed to a player when he is released by the amount of his new deal with another team. The player receives his salary from the team that released him in addition to the full salary from his new contract with another club when there isn’t an offset. Practically speaking, the offset issue will only come into play in the latter years of rookie deals if the player is a disappointment.

Most teams with early first round picks are attempting to hold the line on offsets after eventually conceding the issue last year. None of the top eight picks signed contracts until the latter part of July when the start of training camp approached because of the offset stalemate. The first seven picks didn’t have offsets with their guarantees. The ninth and 14th picks also signed deals without offsets.

Agents feel justified in insisting on guarantees without offsets because the current collective bargaining agreement drastically reduced salaries at the top of the draft. Eric Fisher’s fully guaranteed four-year deal will be worth $22,190,498, including a $14,518,544 signing bonus, while Sam Bradford signed a six-year contract worth a maximum of $86 million (with $50 million in guarantees) as 2010’s first pick. The rollback in rookie salaries ensures that teams can’t make the type of financial mistake the Raiders did by selecting JaMarcus Russell with the first pick in 2007. He made $39.365 million in three disappointing seasons in Oakland, which is slightly over $17 million more than the four-year deal Fisher is expected to sign. 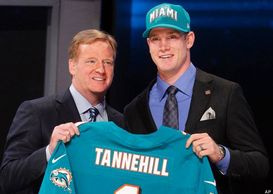 The Dolphins may insist on an offset for Dion Jordan, just like the team did last year with Ryan Tannehill.

The new resistance stems from the Miami Dolphins signing Ryan Tannehill, the eight pick in 2012, to a contract containing offsets in each year. Instead of a deal without offsets, Tannehill received a better payment schedule on his signing bonus (first round picks usually have some portion of their signing bonus deferred) and minimum base salaries in 2013 through 2015, with the rest of his annual compensation in sixth day of training camp roster bonuses.

The Detroit Lions were the first team to sign a player taken early in the 2013 draft. Fifth pick Ziggy Ansah does not have offsets, which was expected, in his fully guaranteed four-year contract.The Lions’ 2012 first round pick, Riley Reiff (23rd overall), has the first three years of his deal guaranteed without offsets. He has the only contract in the second half of the first round without offset language. Surprisingly, the Lions’ second round pick, Darius Slay, doesn’t have offsets either, which is unprecedented.

Teams scored a victory in the offset battle with 14th pick Star Lotulelei because his contract with the Carolina Panthers contains offsets. This is noteworthy since the St. Louis Rams didn’t include offsets in Michael Brockers’ deal last year as the 14th pick. Robert Quinn, 2011’s 14th pick, only has an offset in 2013, his third contract year, with his Rams deal. The Panthers had given their two previous first round picks under the rookie wage scale, Cam Newton (first pick in 2011) and Luke Kuechly (ninth pick in 2012) deals without offsets.

The inclusion of offsets in Lotulelei’s deal shouldn’t impact Tavon Austin’s ability to get guarantees without offsets. Although Tannehill had them as the eighth pick last year, the Rams have established a team precedent on offsets with Brockers and Quinn later in the first round. If another team besides the Rams or Lions had the eighth pick, offsets would probably be a sticking point in the deal.

A situation that bears watching is with third pick Dion Jordan. Generally, teams are reluctant to set unfavorable precedents in contract negotiations, which may make the Dolphins resolute about offsets. The Dolphins were successful in getting offset language with Tannehill despite being sandwiched by deals without it. Tannehill’s offsets are significant because quarterbacks are usually given favorable treatment in rookie contracts, particularly in the early rounds. For example, Andy Dalton and Colin Kaepernick received larger third year contract guarantees in their 2011 rookie deals as the third and fourth picks of the second round than the two players taken ahead of them in the second round.

Additionally, all of the guarantees in the contracts signed during Miami’s free agency spending spree, including Mike Wallace’s five-year, $60 million deal, contain offsets. The Dolphins may also feel that they can be adamant because Jordan is expected to primarily contribute as a third down pass rusher and on special teams as a rookie.

The Philadelphia Eagles and the Cleveland Browns, who have the fourth and sixth picks, may be equally determined to sign deals with offsets, despite Ansah’s deal, partially due to the potential dynamics with Jordan. The Eagles are sensitive to offsets because of Nnamdi Asomugha’s 2011 deal, which made him the NFL’s highest paid cornerback. $4 million of his 2013 base salary was fully guaranteed without an offset. He was released in March when he refused to a take a substantial pay cut. Asomugha will receive $4 million from the Eagles and $1.35 million from the one-year contract he subsequently signed with San Francisco 49ers this year because of the lack of an offset.

Whenever a new regime takes over, contractual precedents can become obsolete or meaningless, especially if they aren’t consistent with the new regime’s philosophy. Browns CEO Joe Banner and general manager Michael Lombardi may refuse to be bound by Trent Richardson’s deal without offsets as the third pick last year. The Eagles were at the forefront of teams signing second round picks to five-year deals when Banner was team president. While Lombardi was a front office executive with the Oakland Raiders, second through seventh round picks routinely signed five-year deals. A four-year deal was considered as the norm in the second round, with three-year deals as the standard in the latter parts of the draft. These practices stopped when the 2006 collective bargaining agreement limited contracts after the first round to a maximum length of four years. Given the hard bargain driven on length of contract, the same approach could be taken with offsets.

It seems unlikely that Fisher, the first overall pick, will sign a contract with the Kansas City Chiefs containing offsets. The first pick hasn’t had offsets since the rookie wage scale’s inception in 2011. The situation is compounded by Joel Segal representing both Fisher and Austin. If Austin’s deal doesn’t contain offsets as anticipated, the Chiefs will not only have to overcome the established practice with the first pick but will have a hard time justifying to Segal that his client taken seven picks higher (Fisher) than his other client (Austin) should have less favo rable contract terms.

The Jacksonville Jaguars shouldn’t fare any better with second pick Luke Joeckel. Ben Dogra, who is Joeckel’s agent, resisted offsets with Robert Griffin III as last year’s second pick. It will be a surprise if Dogra, one of the NFL’s most prominent agents, reverses course with Joeckel unless directed by him to do so.

The New York Jets could have more success on offsets with the ninth pick than the Chiefs and the Jaguars at the top of the draft. Dee Milliner recently switched to Tannehill’s agents. The Jets will try to use the Tannehill deal to their advantage in the Milliner negotiations.

It will be interesting to see how the offset issue unfolds in the coming weeks. There could be a domino effect that extends to a majority of the subsequent picks that didn’t have offsets last year if Miami is successful in preserving their precedent with Jordan before the other picks sign. Even though holdouts are largely a thing of the past because of the rookie wage scale, there could be an increase in them if agents are unwilling to give back the ground gained last year regarding offset clauses.