Charles Woodson recently signed an incentive laden one-year deal worth up to $4.3 million in a reunion with the Oakland Raiders, who selected the 36-year-old fourth overall in the 1998 NFL draft. The base value of Woodson’s contract is $1.8 million. The deal has a $700,000 signing bonus, a $100,000 workout bonus and a $1 million base salary.

Woodson has $2.5 million in not likely to be earned incentives (NLTBEs) based on playtime, interceptions and individual honors. The real issue is whether his NLTBEs are realistically achievable.

Any 2013 incentives with higher thresholds than Woodson’s 2012 individual statistical achievements are classified as NLTBE. Since the 2009 NFL Defensive Player of the Year missed nine games last season with a broken right collarbone, intercepted one pass and had 42.92% playtime, he has modest triggers for NLTBEs. 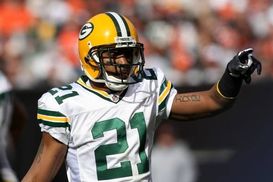 Woodson has $400,000 in honors incentives. He earns $200,000 for making the Pro Bowl. Woodson must be named on the original ballot and participate in the game unless he’s been medically excused to earn the incentive. Participating as a replacement player doesn’t qualify. There’s also $200,000 for being named NFL Defensive Player of the Year.

It’s conceivable that Woodson can earn the entire $1.5 million of playtime bonuses in his incentive package. Woodson was quickly named starting free safety after signing with the Raiders. Before suffering a broken collarbone last year, Woodson had topped 90% playtime in each of the previous four seasons. Reaching 80% playtime seems more likely considering that the average playtime for starting safeties in 2012 was 81.51%. There has been some speculation that the Raiders will monitor the 36-year-old’s playtime in an effort to keep him fresh, but Ronde Barber had 99.35% playtime as a 37-year-old free safety last year with the Tampa Bay Buccaneers.

Woodson shouldn’t count on earning either of his honors incentives. Only three safeties from each conference are named to the Pro Bowl. Woodson faces stiff competition from Eric Berry, Jairus Byrd, Reshad Jones, Troy Polamalu, Ed Reed and Eric Weddle. Playing for a rebuilding team will likely hinder Woodson’s Defensive Player of the Year chances if he has a remarkable season. Jason Taylor (2006) is the only player to win the award in the last ten years while playing on a losing team. Winning six games would be considered a respectable season by the Raiders in most circles.

Woodson should realistically earn $1.3 million of the playtime incentives contained in his $2.5 million incentive package if he stays healthy. His total 2013 compensation should be $3.1 million, which is $550,00 more than the maximum former Oakland safety Michael Huff can earn in the first year of his three-year, $6 million contract (worth up to $7.2 million through base salary escalators and incentives) with the Baltimore Ravens.