The red flag report will sort out the truth from the rumors in the sea of draft coverage and make an unbiased evaluation of the risk, if any. 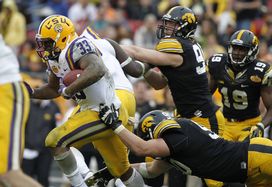 Jeremy Hill in the Outback Bowl against Iowa

What we know: On January 12, 2011, while in high school, having already committed to LSU, Hill was arrested for the alleged sexual assault of a 14 year-old girl. (charged officially with oral sexual battery) The Baton Rouge Police Department said Hill and another student pressured the girl to perform oral sex in the boys’ locker room. (SOURCE)

LSU allowed him to sign, and he sat out the 2011 season as the legal process played out.
In January 2012, he plead guilty to “carnal knowledge of a juvenile”, which is a misdemeanor. He was sentenced to two years probation. (SOURCE)

On April 27th, 2013, Hill was arrested for simple battery in connection with a fight outside Reggie’s Bar in Tigerland. Hill was suspended from the team.

On July 8th, 2013, Hill was formally charged with simple battery, and a video of the incident was released to the public.

On July 12th, Hill plead guilty and was sentenced to two years unsupervised probation, a $375 fine for the victim’s medical bills, forced to write a letter of apology, and complete 50 hours of community service. (SOURCE) He was also ordered to not comment to the press or use social media, attend anger management classes, and was given a 9 PM curfew (later extended to 11 PM in December 2013)

On August 5th, 2013, a judge extended his probation, for having violated the terms of his original probation for two more years. Hill was reinstated to the team hours later. (SOURCE)

Speculation: Many reports of the April fight claimed Hill sucker punched the victim from behind. The video of the fight is out of context, the complete details of the night were never made public, and nowhere in it is a clear punch from behind thrown by Hill, who approaches and punches the victim on the left side.

The reinstatement of Hill to the team on August 5th was almost universally reported as being done by way of team vote. Les Miles came under fire for this, but has since clarified that the reinstatement was initiated by LSU and himself, and finalized with the consent of the team.

What others say: In May 2013, Hill’s attorney said that in the events leading up to the fight, Hill was heckled about his past. Without giving specific details, attorney Marci Blaize said "There's no denying he's on the video, but the video is 15 seconds long and certainly doesn't tell you everything that happened that evening. In my experience and the cases I've had, there's usually a reason why a person will strike another individual and I can tell you that's the case here." (SOURCE)

Of Hill, Les Miles said, “"The guy is a good person, a good college student, a guy who has not had constant bad behavior." (SOURCE)

After Hill’s reinstatement, Quarterback Stephen Rivers said, “"It's not like him to be in that situation. He used to live next door to me. He's a great guy who was in the wrong spot at the wrong time. He has leadership capabilities. He showed that last year before the incident. That will be great for our team."

What he says: Hill’s most detailed discussion of the events was at the 2013 LSU media day. He expressed remorse and a desire to move forward.

He reopened his twitter account in January, using it to declare he’d be entering the NFL draft. He has made no direct mention of either incident through it.

Risk: 6/10 (MEDIUM-HIGH) - His two arrests before the age of 21 for completely unrelated crimes do not inspire confidence in his decision making matrix, particularly with regards to their timing. The first, occurring before National signing day, with only an informal commitment to LSU jeopardized his entire college career. The second, coming while on probation, heading into what ended up being his last season at LSU, could have easily landed him jail time with a different judge at the August hearing. As a teammate, though, you can't find a player with a single negative thing to say about him. He’s easily NFL talent, but as Greg Gabriel wrote in his scouting report of Hill, with the running back position being devalued in the draft lately, many teams will not be as open to a player with Hill’s past as Les Miles was, twice.