The National Football Post shifts its 2014 draft preview analysis to the linebacker positions today, with a look at the top-5 prospects at the OLB and ILB positions.

1. Anthony Barr, UCLA: Barr played running back until last year when he made the switch to outside linebacker. He’s got the size and speed you are looking for at the position and had a great year as a junior with 21.5 tackles for loss and 13.5 sacks. 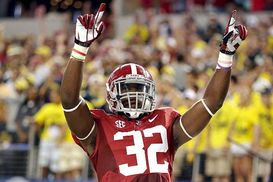 2. Kyle Van Noy, Brigham Young: Van Noy is a playmaker on the defensive side of the ball and proved that last year with 22 tackles for loss, 13 sacks and two interceptions.

3. C.J. Mosley, Alabama: Mosley is a solid overall athlete, has good coverage ability and will be a 3-down linebacker in the NFL.

4. Trent Murphy, Stanford: Murphy is a big, physical outside linebacker who can rush the passer effectively, demonstrating that with 10 sacks last year.

1. Shayne Skov, Stanford: Skov came back last year from a 2011 knee injury and had a very productive season.

2. Max Bullough, Michigan State: Bullough is a big, physical linebacker who looks the part of an NFL MLB.

3. Andrew Jackson, Western Kentucky: Jackson can make plays sideline to sideline but is a bit shorter than what most scouts are looking for. However, his playmaking ability outweighs the minimal concerns regarding his height.

4. Dan Fox, Notre Dame: With Manti Te'o moving on to the NFL, look for Fox to pick up the slack on defense this year.