With the 2013 draft class now in preparations for their first campaign as professional football players, we turn our attention to what 2014 has to offer. Today we focus on the two positions that had little luck in April’s first round: Quarterbacks and running backs.

1. David Fales, San Jose State – Fales was a junior college transfer and has all the tools you are looking for in a quarterback. He had a great junior season and could see himself get more national attention this year.

2. Aaron Murray, Georgia – Murray has started since his freshman year and has been a very productive quarterback in the SEC. The issue with the Georgia standout is that he is shorter than the NFL would like in a starting quarterback. 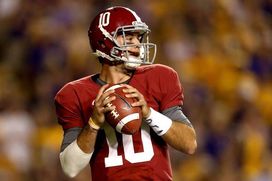 McCarron returns to Alabama where he will attempt to win a third National Championship.