Why Andrew Luck is the most untradeable player in the NFL

He’s six years younger than Aaron Rodgers, as athletic as Cam Newton, much bigger than Russell Wilson and as clutch as they come.

If you had to select one player to build your team around at the most important position, you would choose Andrew Luck.

“He has the stuff that makes legends,” said Colts linebacker Robert Mathis.

Luck is poised to leave his legacy on the game because he has all of the qualities, which would make him the No. 1 selection in this quarterback-driven league if NFL general managers held a draft. (For what it’s worth, Deion Sanders took Luck first in the 2014 Pro Bowl Draft.)

The high school valedictorian earned a 3.48 GPA as an architectural design major at Stanford, but his intelligence transcends book smarts and extends to his mastery of football concepts.

Former Colts offensive coordinator/interim coach Bruce Arians — who was on the Colts and Steelers offensive staffs, respectively, when Peyton Manning and Ben Roethlisberger were rookies — told me that Luck had more offensive responsibilities than either did during their rookie years.

A stout Steelers defense and veteran running backs Jerome Bettis and Willie Parker buttressed Roethlisberger. So Big Ben was often reduced to completing play-action and third-down passes as a rookie.

During his first year with the Colts, Manning would have two or three plays sent to him from the sideline and he’d choose one. But Manning did not yet extensively direct the no-huddle offense that would become his calling card.

By his rookie year, Luck was already orchestrating that hurry-up attack — something Manning did not do until Year No. 2. 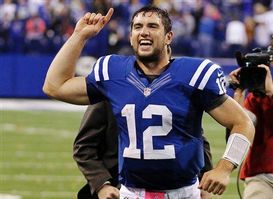 Though Luck is a classic dropback passer, his NFL Scouting Combine numbers mirrored those of Newton, considered one of the game’s most multi-dimensional athletes. Both ran the 40-yard dash in 4.59 seconds, and Luck jumped two inches higher (36) on the vertical leap and two inches shorter (124) on the broad jump.

The versatile Luck can tuck the ball and run, having amassed 632 rushing yards and nine rushing touchdowns in his two years.

“If the team needs a first down, and guys are covered,” said Luck modestly; his demeanor and media-friendly nature are other positive attributes, “I’ll do my best.”

Luck’s arm is both strong and accurate as exemplified by the biggest play of his young career — the game-winning throw to wide receiver T.Y. Hilton, which traveled more than 50 yards on a rope and hit Hilton in stride during the Colts’ 45-44 playoff victory against the Chiefs.

Whether or not you believe clutchness is an intangible factor or a series of statistical anomalies, Luck seems to have an “it” factor and an ability to lead his team back regardless of the circumstance.

In just 35 career games, Luck has recorded a staggering eight fourth-quarter comebacks and 11 game-winning drives. He has seven wins after the Colts trailed by double-digits in a game.

And, of course, the most impressive of them all was the playoff win against the Chiefs after Indianapolis trailed 38-10 in the third quarter, making it the second largest comeback in NFL postseason history.

“I saw the fire in his eye. He wanted to win this game no matter what the scoreboard was,” said Colts wide receiver LaVon Brazill, following the playoff contest. “And he came out here and won this game for us.”

Making Others Around Him Better

Elevating the play of their teammates is an attribute of the best quarterbacks, and — as Brazill alluded to — Luck certainly possesses that. During his rookie year, he took a Colts team, which went 2-14 the year before, and improved it to an 11-5 playoff team.

In his next year, he led the Colts to the AFC South title, even though he was without his best target, wide receiver Reggie Wayne, who tore his ACL in Week 7.

At a linebacker-like 6-4 and 239 pounds, Luck has the size to endure a pounding.

It’s why when things break down he can become a running threat, taking on defensive backs and even linebackers.

His sturdy frame is part of the reason he has not missed a start during his two years, even though he has yet to play behind a strong pass-protection unit. During Luck’s rookie year, his offensive line allowed the ninth most sacks in the NFL.

Luck has not reached that tier yet, but he continues to improve. From 2012 to 2013, he increased his completion percentage by more than six points and reduced his interceptions by nine.

Luck’s long career is not only just getting started, but the best of it also lies ahead.