A look inside the Jets' offensive playbook

On Sunday in the Jets 28-24 win over the Bills, Mark Sanchez showed some signs of inconsistent play in the passing game. However, when the ball was inside of the red zone the Jets' QB produced. Four TD passes, including the game winning throw to Santonio Holmes where Sanchez extended the play and allowed his WR to work back to the sideline.

Today, I want to break down his first three TD passes, talk route schemes, alignments and personnel. Base concepts from offensive coordinator Brian Schottenheimer that Sanchez was able to execute in a game the Jets had to win to stay in the playoff discussion.

Let’s check out the routes and discuss some coaching points… 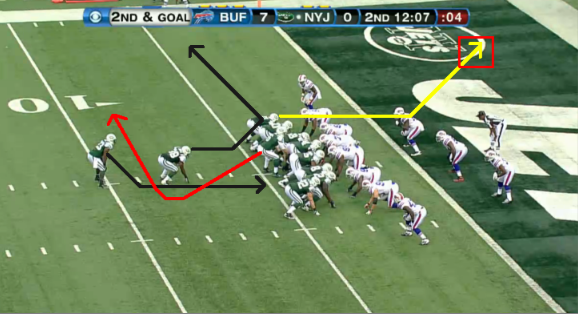 - We are seeing this concept every Sunday in the NFL inside of the 5-yard line. Open (or weak) side play action with the Flat-7 (corner) combo. The same route scheme Eli Manning and the Giants ran to beat the Patriots in Foxborough.

- What is a “Swap Boot?” Different than the Manning TD pass (Lead Open play pass), the Jets want to show action to the closed (or strong) side of the formation with Sanchez rolling back to his left. The FB will step to the play side and come back underneath to the Flat with TE Dustin Keller taking a vertical stem to the 7-cut.

- Why does it work? The same run/pass keys I always talk about. Goal line defense is a base zone concept in the NFL (first to the flat, first up the field). But when you have defenders sticking their eyes in the backfield, this is a TD every time. 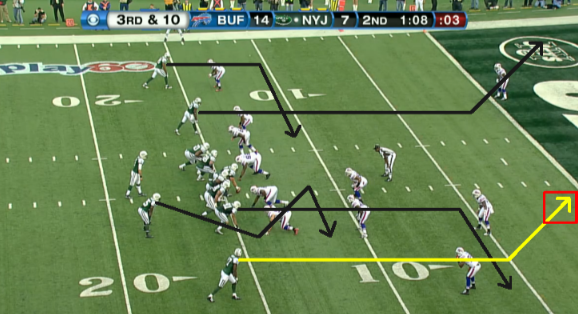 - The Jets are working the Smash-7 combo to the open side (No.2 on the ball is a pre-snap key to that combination) with the “Pin” concept to the closed side. The RB will release on the “whip” angle route, but Sanchez wants to work Plaxico Burress and Keller to the short side of the field.

- To simplify the “Pin” route, think of a deep inside breaking route with an underneath concept. It is a classic Cover 4 (quarters) beater when you target the SS and it also works vs. Cover 1 (man-free) with a CB playing the post (or dig) from outside leverage.

- The Patriots carry the same concept in their playbook. In their win over these same Jets, Tom Brady targeted TE Rob Gronkowski vs. a Cover 1 look. The dig (square-in) with a flat route underneath.

- Same situation here for the Bills. A CB playing outside leverage vs. a deep inside breaking route to Burress (aligned with a reduced split). A clear throwing lane for Sanchez. 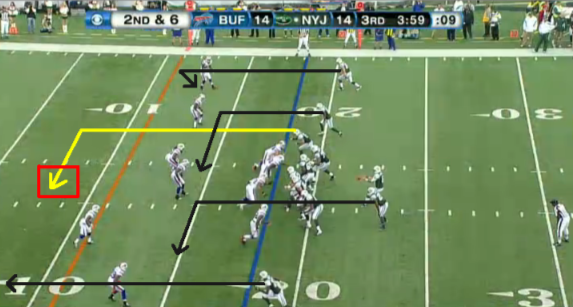 - The Hi-Lo concept shows up in the Eagles' playbook every Sunday and is also a top third down scheme from Mike Martz and the Bears. A intermediate dig route (“Hi”) paired with an underneath crosser (“Lo’'). Two levels for the QB to read on routes that break between the numbers and the hash marks.

- Check out the formation alignment for the Jets. This looks like a three WR set, but with Ace personnel on the field, the Jets are using some added window dressing to get Holmes in a favorable matchup in the slot. Remove the No.2 TE from the core of the formation as the Z receiver to the closed side.

- Burress will run a basic clear out 9 (fade) route to hold the FS safety deep in the middle of the field. That allows Sanchez to work the ball to Keller once he breaks his route away from the defenders leverage.

These aren’t complex schemes, and if you take away the formation alignment on the Hi-Lo concept, we are looking at basic concepts in every NFL playbook. However, think play action and inside breaking rotues with the Jets and Sanchez inside of the 20-yard line. High percentage throws for a QB that can be inconsistent and careless with the football.