A quick playbook session on the NFL 'boot' game

The boot (and swap boot) show up every Sunday in the NFL. But what are the keys to look for and how is the boot really run at the pro level? Today, let’s go through a quick playbook session up on the chalkboard to give you a better understanding of the top two boot concepts in the NFL.

We will start with the basic boot action out of “Ace” personnel, move to the swap boot with “Regular” personnel on the field and then talk about some simple keys to defending both concepts. 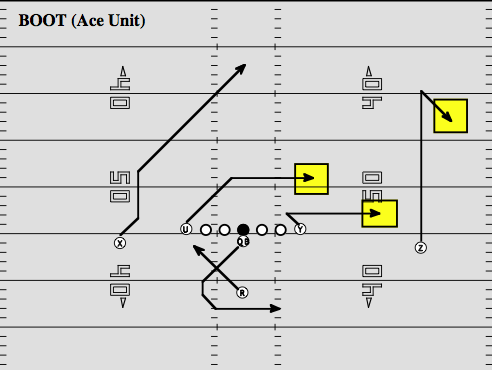 - The key is the set up. As an offense, you need to run the inside and outside zone, the stretch, etc. to sell the safety and LBs on the boot action. Plus, the QB has to show the ball on the play pass (use ball fake instead of open hand).

- The WR's routes in the boot are the almost identical in every playbook. With the reduced split, the X will take a hard inside release to work to the post. Looking at the alignment of the Z, you will only get two routes on a vertical release: fade or comeback. And with every route (outside of the 3-step game) breaking between a depth of 12-15 yards, once the WR chops his feet at 15, play for the comeback.

- Check out the TEs (Y, U). The Y will block down and then release quickly to the flat. He is the first option if the closed side DE rushes up the field and contains the QB. The U is going to break back across the field and become the second level read for the QB. 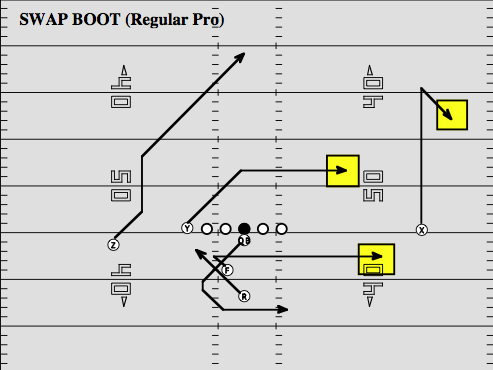 - When Mike Shanahan was coaching the Broncos, this was one of the top concepts in the Denver playbook. Use the Lead Strong and Power O to set it up out of a 2-back formation. And it was a nightmare to stop when they established the run game early.

- The difference in the swap boot is the fullback (F). He will step to the play side and come underneath the QB on the drop—releasing to the flat on the open side of the formation. A tough read for the LB.

- The same WR splits apply here. Z aligned on top of the numbers and X outside of the numbers to set up the route concepts (post and comeback). The Y will release up the field and work back to the open side.

How do you defend it?

Run/pass keys: You must read “High-Hat” (pass) vs. “Low-Hat’’ (run). Coaches will describe the O-Line in the boot action as “elephants marching.” Translation: the O-Line will turn and run. This is a classic “High-Hat” read for the defense.

Release of the TE: If you are playing safety, the TE will tell you run or pass based off the release. On run, he will block down or “reach block” the DE. But when he raises off the line and releases up the field, this is a pass.

WR splits: I mentioned them above, but it is worth repeating because the pre-snap splits are an open book from a defensive perspective. A reduced split (paired with a WR outside of the numbers) has to alert the defense that the boot is coming. WRs use the numbers as landmarks to set up their routes.

Contain: The DE away from the run action has to be disciplined. If he crashes down hard (attempting to chase the play from behind), the QB will now have a run/pass option with time to look up multiple targets. The DE has to get up the field, forcing the QB to pull up and unload the ball.

Don’t sleep on the deep post: I don’t have the deep post highlighted on the chalkboard as a primary read. However, if the QB has time, he can target the post. As a Cover 2 or deep middle of the field safety, don't drive down on underneath concepts. That's not your play to make.

Eyes: Where are you looking? The No.1 reason DBs and LBs get beat is because of poor eye placement. Stick your eyes in the backfield and this is guaranteed to be a productive play from the offense. Trust what you see.