After watching Newton vs. Bears, I am buying the hype

I will hit on the Bears win (and Mike Martz’s new game plan) tomorrow in my Monday NFL notes. There are some topics to discuss there after Chicago led with a call sheet designed to run the football with Matt Forte.

But after watching Cam Newton produce (374 yards passing, 1 TD pass, 2 TDs rushing) vs. this Chicago Cover 2 defense today, I see a legit talent—and he will continue to improve.

Here are my notes on the rookie... 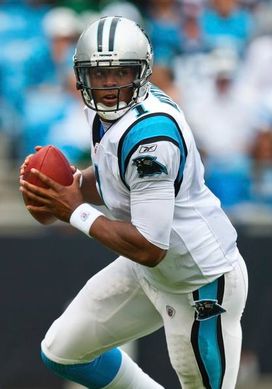 ICONThe Panthers are game planning their offense around Newton, and the rookie continues to produce.

- Look at what the Panthers do from a game plan perspective. Multiple personnel groupings, formations, pre-snap movement, etc. They try to cause confusion from an offensive perspective to give Newton options in the passing game. The routes we are seeing are nothing new. But when you can generate matchups vs. Cover 2 and Cover 1, Newton can make the throws.

- Strength in the pocket. That’s key. Chicago didn’t have a solid front-four push today, but even when they sent pressure; Newton stood tall, used his footwork and delivered the ball. Natural instincts when he drops backs to pass. Plus, for a young QB, he doesn’t look to run when the pocket collapses. Keeps his eyes down the field.

- Working out of the gun. Again, tailoring the offense around your QB. They can use the “read option” look; play action and movements passes (think sprint game here). That plays to his talents and allows him to develop at a quicker rate. Don’t force a standard, pro style offense on him. Instead, let him play.

- Steve Smith. Give a lot of credit here to the veteran WR. He is playing at a Pro Bowl level and today he was a matchup nightmare for the Bears in Cover 2 and Cover 1 (8 receptions, 181-yards). That's big for a young QB to throw the vertical game and the deep dig to a veteran that will go make the play.

- Newton isn’t perfect. And there is no question he missed on some throws today. Plus, he gave points to the Bears trying to fit in a curl route vs. Cover 2 that was intercepted and taken back for a TD. Those are plays that remind us the rookie is still learning about coverage reads. But I expect that to come in time for a QB that has only started four games in his career. Every game counts as experience.