All eyes on Forte

There is a natural divide in the NFL between the locker room and the front office. Sure, you will get the standard company line (along with the handshake) when you are drafted or picked up as a free agent—but players know better. 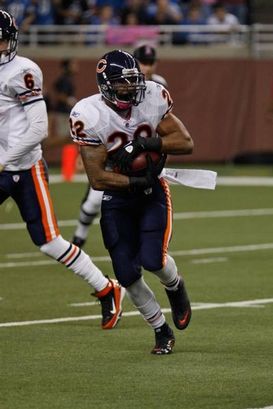 You aren’t really buddies with the GM, the owner, etc. Instead, your job is simple: produce (consistently) or they will replace you.

However, what about the situation going on in Chicago right now with Matt Forte?

That’s a different story from the perspective of the locker room. Those Bears’ players want to see how GM Jerry Angelo and the entire front office handle this, because his deal will impact the entire team.

Does Forte need to be paid? No question as I see it, and the rest of the Bears’ roster would say the same. He came to camp on time and has shown the type of top tier production that needs to be rewarded—with big money.

But look deeper and put yourself in that locker room up at Halas Hall. You are watching how this plays out for when it is your time to approach the front office and start talking about new money.

On Wednesday, Forte told the Chicago Sun Times: ““The running back position is the most physically demanding on the field. Everyone acknowledges that. So to continue to give me the touches I’ve had since my rookie year but not award me a long-term contract sends the message that you’re OK grinding me into a pulp.”

Does Forte make some sense here? Of course he does, and we all know that is part of the job when you carry the ball in the NFL. The team is going to ride you, beat you up and get the most of your legs and body while they still can.

Then they will cut you loose.

That’s pro football for you and a topic the NFP’s Andrew Brandt detailed last week when breaking down money at the RB position.

However, what Forte is saying is the exact same thing the rest of the Bears’ players are thinking. This is about showing the entire locker room that good, consistent football will be handled within. And I don’t think a possible franchise tag for Forte in 2012 is going to cut it in the eyes of the players.

Like I said above, players and GMs aren’t buddies. But they are in the same business. And if that GM can cut a guy that doesn’t produce, then he also has to show the team he will take care of the ones that do show up to play every Sunday.

That sells downstairs in the locker room.