An inside look at Manningham's catch

Eli Manning to Mario Manningham. This is the play you should be talking about after the Giants’ 21-17 win over the Patriots in Super Bowl XLVI. A straight 9 (fade) route with an outside release vs. Cover 2.

Today, let’s go to the chalkboard and breakdown why the Patriots allowed Manning to target a WR down the sideline in a coverage scheme that is designed to limit the vertical passing game. 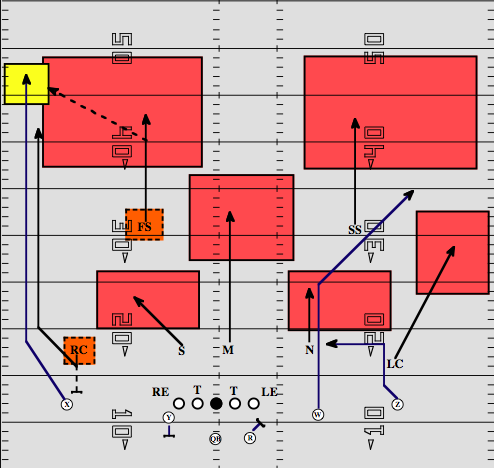 Route scheme: The Giants are using seven-man protection (TE and RB stay in protection scheme) to run a three-man route. To the open (weak) side of the formation, Victor Cruz (W) will work the 7 cut (corner) with Hakeem Nicks (Z) on the short inside “Smash” route (quick square-in). To the closed (strong side), Manningham (X) takes a hard outside release vs. a rolled up CB and stems his route vertically on the fade.

Re-Route No.1: Every DB coach in the NFL teaches their CBs to re-route (jam) No.1 and force an inside release in Cover 2. It takes stress off the deep half safety and allows him to stay on top of his landmark (top of the numbers) to read the QB. Here, Sterling Moore (RC) gives Manningham a clean, outside release that allows the WR to start to work on the cushion (distance between DB and WR) of Patrick Chung (SS). Poor technique at the start of the route that leads to an explosive play.

Reading the release of No.1: This is what you are taught as a deep half safety in Cover 2. An outside release (outside of the numbers) equals two routes: fade or comeback. That’s it. There isn’t another route scheme in an NFL playbook that is run with a vertical steam outside of the numbers. Chung has to read that release and play over the top of Manningham. Allow the WR to tell you the route based on his initial alignment and release off the line of scrimmage.

Understanding the depth of route breaks: Outside of the 3-step game (slant, hitch, option), every route breaks at a depth of 12-15 yards. Once Manningham works past that depth he can only run one route: the fade. No reason for Chung to hang inside with one vertical threat to the deep half. He must get over the top of this route and take an angle that puts him in a position to make a play on the ball.

Technique sells: This is a top tier throw from Manning and finish from Manningham. The Giants’ WR drags the feet, secures the ball and completes the process of the catch. However, this happens because of technique errors in a basic defense we see every Sunday. If you don’t re-route the WR, read the release and take the proper angle to the ball in the secondary, you get beat.