An inside look at the NFL's red zone route tree

Let’s go back to Sunday and talk about the red zone route tree. Three games, three different route concepts to break down and gain a better understanding of what NFL offenses are running inside of the 20-yard line.

Here’s what I want to look at:

I drew up all three concepts from the offense's pre-snap alignments so you can see where the routes are breaking on the field. Let’s check them out and get into some coaching points. 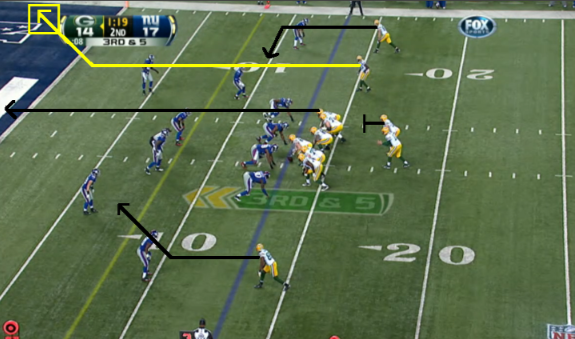 - Splits of the No.1 WRs (X, Z). Both Greg Jennings and Jordy Nelson are aligned outside of the numbers to create room for an inside breaking concept (Slant, Smash).

- Backside of a 3x1 set (with a wide split) equals a slant route. That has been around for years and the Eagles made a living off of this formation (and concept) when Terrell Owens was playing WR in Philly.

- Two vertical routes inside of the numbers: seam and 7 (corner). An ideal combination to test the top of Cover 2, Cover 4 and put stress on the strong safety.

- The “Smash-7” is a route combination designed to beat Cover 2 in the red zone. An underneath smash route to impact the depth of the CB and a 7 route breaking away from the deep half safety. When the CB jumps on the smash route there is a void in the zone in for the QB to target. Just as Aaron Rodgers did here when hit Donald Driver for a TD. 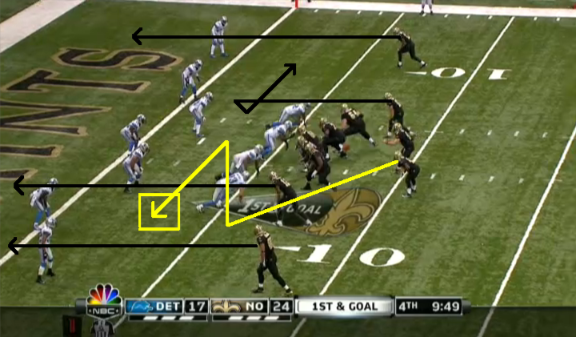 - A matchup play the Saints can win in the underneath route tree because of their personnel. Use RB Darren Sproles and WR Lance Moore on the “whip” options vs. Cover 1 (man-free) and Cover 2.

- Look at the alignment of Moore to the open (weak) side. Why is that tight to the core of the formation? Again, think spacing and routes. The Saints want Moore to release with a vertical stem and work back to the numbers.

- We could call the route from Sproles an “angle” route—a common scheme we see run out of the backfield on Sundays. However, the Saints’ RB is working to draw the defense to the middle of the field so he can break back to the numbers. A simple, easy throw for Drew Brees.

- Why remove TE Jimmy Graham as the No.1 WR to the closed (strong) side? To open up the middle of the field. Graham is running a basic seam route, but when he is aligned outside of the numbers, you have to think about playing the fade inside of the red zone. Instead, he is decoy here run off the top of the defense. 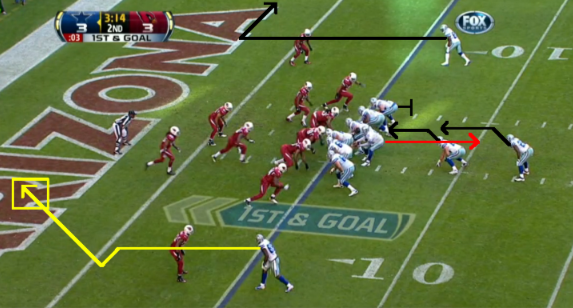 - The Cowboys have their Ace personnel on the field, but they align in a 2-back look to create a Pro Set. Use play action and target the middle of the field.

- Max-protection is also called 8-man protection. With the on the line Y (TE) staying in to block, Dallas now has eight players to protect vs. the Cardinals' Cover 0 pressure (no safety help).

- This is a two-man route. The Z receiver will stem his release vertically up the field and then work to the out/7 route. To the open side, WR Dez Bryant (X receiver) will use a double move to create separation vs. Cards’ CB Patrick Peterson.

- In Cover 0, DBs are taught to play with inside leverage. However, because Bryant wins on the double-move, he now has Peterson on his back with no safety help in the middle of the field. QB Tony Romo has time to throw because of the protection and can deliver a clean ball to Bryant for the TD.