An inside look at the Senior Bowl playbook

As the NFP begins to wrap up its coverage of the Senior Bowl from down in Mobile, let’s take some time to talk the Xs and Os of the playbook these rookie prospects are working with. There are only two coverages you will see in the secondary: Cover 1 (man-free) and Cover 3 (3-deep, 4-under zone shell). No blitzes, Cover 2 or Cover 4 (quarters). Base football that allows scouts to grade the talent on the field.

Today, let’s take a look at Cover 3 vs. the base Curl-Flat combo that we saw throughout the week on the field. First, check out the NFL route tree. A numbering system used to identify individual route stems that are listed in this graphic. 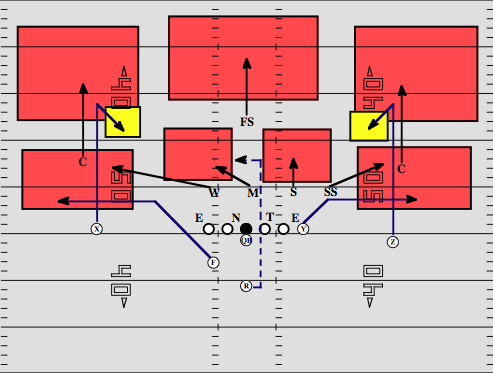 CB technique: The CB’s in Cover 3 will align in an off-man position and play to their free safety help in the middle of the field. As a deep outside third player, you will match any vertical route stem and drive downhill on the curl from an outside shade.

Curl-to-Flat players: This is the underneath zone technique for the strong safety (SS) and the Will backer (W) in the 4-3 “Over” front. “Buzz” to the curl at a 45-degree angle from your initial alignment. The SS will drop to the closed (strong) side of the formation with the Will playing to the open (weak) side. Once they are threatened in the flat (Y, F), both players will widen to hold the edge of the coverage.

WR stem: A straight vertical release (on top of the numbers) to expand the “cushion” (distance between WR and CB) vs. a deep third player. With every route (outside of the 3-step game) breaking at a depth of 12-15 yards, the WR wants to push the CB deep, chop his feet and come back downhill to the football.

QB’s route progression: The QB two has primary reads. Both the SS and Will work to hold off the curl on their initial “buzz” drop. However, once they have to widen to the flat, the curl becomes the No.1 option for the QB. Read deep to short and come back down to the flat if the SS or Will want to hang on the curl. As a final read, the QB can check down to the RB (R) in the middle of the field.

The depth of the playbook will dramatically increase for QBs Brandon Weeden, Nick Foles, Kirk Cousins, etc. once they get into an NFL training camp this summer. However, the Senior Bowl is all about technique, talent and overall skill sets. Line up, produce and show NFL scouts, GMs and coaches that you have the ability to play at the pro level.

Stay with the NFP for daily NFL Draft coverage.