Let’s talk some Bears-Dolphins. Five things to take a look at as we head towards kickoff down in Miami tonight…

1. Cutler in the red zone: Jay Cutler has played his best football of the season in the last two wins over Buffalo and Minnesota. He is seeing the field better, making plays outside of the pocket and the offense is starting to cater to his talents. Movement passes (boot, sprint, dash) and play action based of a considerable effort to run the football. But, just like we saw last Sunday, Cutler still gets careless with the ball—especially in the red zone. On the road, you can’t take points off of the scoreboard. The Bears’ QB has to protect the ball inside of the 20-yard line and not force the throw. No need to take risks tonight in a game they have to get to keep pace with Green Bay. 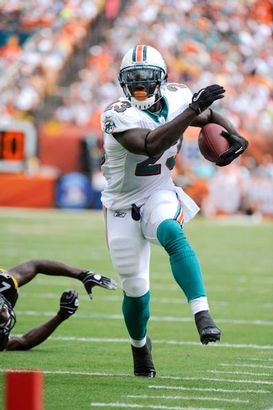 ICONRonnie Brown and the wildcat offense could have an impact tonight in Miami.

2. The Wildcat Offense: Is it a factor tonight? If I am Tony Sparano, I use the wildcat often, because the Bears have had limited practice time this week due to the Thursday kickoff. Get Ronnie Brown in the downhill runs out of the gun and use Ricky Williams on the speed sweep. The Bears had only one good day of practice (Tuesday) and preparing for an exotic formation like the wildcat requires extra prep time when you don’t see it on a regular basis. I broke down one example of the Dolphins’ wildcat offense on the chalkboard in today’s Chicago Tribune, but don’t be surprised to see a new look from the Miami coaching staff tonight--something that isn’t on tape.

3. Thigpen’s production: The Dolphins will have a new starting quarterback tonight in Tyler Thigpen. Let’s tell it how it is: Thigpen is the No.3 on the roster. However, we aren’t talking about a guy who was out walking the streets. The QB had eleven starts for Kansas City in ’08—throwing 18 TDs and 12 INTs. Plus, Thigpen threw a TD in the Miami win last week over Tennessee.

Tonight, run the game plan and work the routes that are your typical Cover 2 beaters against the Chicago defense: 4 verticals, flat-7 (or flag), “999” (4 verticals out of 3x1 set) and the deep dig (square in). Have to make those throws to beat Chicago. Take some shots to WR Brandon Marshall and use WR Davone Bess in third down situations—because there isn’t a CB on that Bears roster that can check him in man coverage.

4. Chicago’s safeties: They gave up some plays last week against Brett Favre and the Vikings in their Cover 2 defense. Both Danieal Manning and Chris Harris were beaten by Percy Harvin because they got off of their landmarks and took the bait of the inside vertical seam. The Dolphins are watching the same tape. No reason not to challenge those safeties outside of the numbers in the vertical game. I talked about the Chicago defense on Monday, and I do see them as a championship caliber unit—but giving up the deep ball is a quick way to go home with a loss. Keep an eye of rookie FS Major Wright—who is beginning to rotate into the lineup. He will be a starter soon.

5. Special Teams: The kicking game will always have an impact in a short week. The Dolphins have had their own issues on special teams this season, and we know what the Bears want: field position created by returner Devin Hester. Kickoff coverage will be big and when it comes to punting the football, there is no reason to give Hester open space to work with. If I am the Dolphins, I kick that ball out of bounds and sacrifice 10 or 15 yards to take my chances with Cutler and that Chicago offense. Win the kicking game tonight and you should walk out of the stadium with a win.