Bears-Packers: Matthews rips up the O-Line

After watching the Packers 23-10 win over the Bears tonight at Lambeau, let's breakdown my notes: Xs and Os, personnel, game plans, etc. 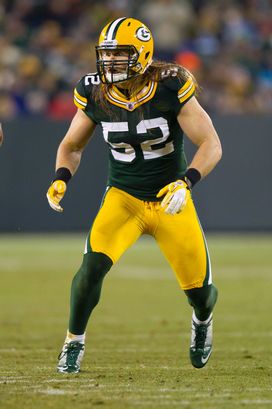 US PRESSWIREThe Bears didn't have an answer for Clay Matthews' edge pressure.

Clay Matthews: Here's what you get with the Packers’ OLB: speed up the field and multiple moves at the point of attack. The speed is one thing, but what stands out from my perspective is how violent Matthews is with his hands. That’s clinic tape vs. a Bears’ O-Line that didn’t have an answer for one of the top edge rushers in the game. He finishes with 3.5 sacks on the night. Impressive.

Packers' 2-Man vs. Marshall: A lot of questions tonight on the lack of production from Brandon Marshall. Give some real credit to Packers’ CB Tramon Williams but also look at scheme here. Green Bay played some 2-Man over Marshall. A quick breakdown: man-under (“trail” technique) with a deep half safety sitting over the top. You can’t run the deep Dig (square-in), Post or 9 (fade). It turns into almost a “bracket” look with the safety driving downhill and the CB sitting to the inside. The same scheme the Packers ran last season vs. Detroit’s Calvin Johnson in the Thanksgiving win. Smart game plan.

Fake FG for a TD: Look at it this way: the edge rushers (CBs) are going to take an up field angle to the holder. When you pull a backside O-Lineman and pitch the ball to the opposite wing player (Crabtree), this plays out almost as the “Power O” run scheme. Great call given the game situation.

Cutler’s issues: This is what you are going to see from the Bears’ QB when he doesn’t have time to throw in the pocket. Cutler is going to take chances, his technique and footwork will break down and he starts pressing to make plays. Cutler was sacked 7 times and threw 4 INTs. Part of producing at the QB position is having your WRs make some plays for you, but we can also look at the decision making process here from Cutler. Bad football all around for the Chicago offense.

Cedric Benson: The Bears leaned heavily on Cover 2 (or Tampa 2) tonight to take away the vertical concepts in the Green Bay playbook. However, to sit in 2-deep, you have to play with a 7-man front. The Packers used Cedric Benson (20-81) out of the gun, the one-back stretch game and in 2-back looks. Run the football and set up 3rd and 2-6 where throwing the check down or the underneath option route is enough to move the sticks.

Bears' pressure: Just talked about Cover 2 and it starts with the ability of your front four to get home. The Bears got production from Julius Peppers, Henry Melton and Julius Peppers. And we saw Chicago use different alignments (McClellin and Peppers on the inside) to create matchups to get to Aaron Rodgers.

Woodson’s pick: I agree that Earl Bennett has to come back to the football and help out his QB when he moves the pocket to extend the play, but when you hang a ball in the middle of the field vs. Woodson you are asking for trouble. The Packers’ CB still has a smooth transition when he plants his foot to drive on the throw.

Beating the Bears’ red zone Cover 2: On the Rodgers TD pass to WR Donald Driver, Green Bay ran two verticals at Major Wright. In 2-deep, the safety has to stay square and drive on the throw. However, with Wright opening to the outside 9 route (along with Mike Backer Brian Urlacher sitting short) the middle of the field becomes an easy target. Have to play the technique of the defense to win--especially in the red zone.

Beating the Packers’ red zone Cover 2: The “Y Shake” (double-move). With both deep half safeties occupied, the TE creates a one-on-one matchup vs. the Mike Backer, D.J. Smith. On the “shake,” the TE will press up the field, show an outside breaking cut and then work vertically down the seam. All it takes is for that Mike Backer to settle his feet and he is immediately playing with his back to the QB.

Missed opportunity for Marshall: Back in camp, the Bears ran multiple route combinations out of “stack” looks. Tonight, it was the Flat-7 (corner) vs. Cover 1. Ideal call given the defensive scheme. Outside breaking route with the FS in the deep middle of the field. That’s too much ground for a FS to make up vs. the 7, but the Bears have to finish that play. Can’t drop that one.