Brad Smith and the Bears?

According to Michael C. Wright of ESPNChicago.com, the Bears have “legitimate interest” in Jets WR Brad Smith who is set to become a free agent when the new league year opens. 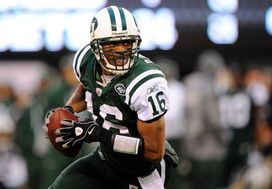 ICONCould we see Brad Smith in a Bears uniform this season?

While we shouldn't see Smith as that “true No.1” Bears fans have been talking about since the end of the 2010 season, he does bring some interesting value to Mike Martz’s offense and the return game on special teams.

Think of it this way: he provides options. Use him inside of the numbers, down the field in the vertical game and aligned in multiple positions on the field. Part of the WR rotation and used in specific game situations.

I do have to question whether or not he can get in and out of his brakes at full speed in Martz’s offense. But if the interest is there, then we have to buy the idea that Chicago has done seen enough tape on Smith.

Plus, the special teams impact is always going to increase value with a Lovie Smith coached football team. This could be the big sell from the perspective of the Bears.

Now, Smith isn’t Sidney Rice or Steve Smith in terms of big play ability, but don’t let that discount what he could possibly bring from a playbook perspective to the Bears in 2010. Again, this isn't a play for an elite WR. Something that Chicago will not chase during free agency.