Let’s focus on Alabama’s Mark Ingram. The RB—and former Heisman trophy winner—is projected as a mid-to-late first round pick. There were some questions that surfaced after Ingram posted a 40 time in the low 4.6s at the NFL combine, but grading running backs goes far deeper than the stopwatch.

Production, vision, cut back ability, blitz pickup and lateral quickness. That’s what I am looking for in a first round back. A player that can run the ball in the 4th quarter to wear down defenses, score in the red zone and break tackles. I have watched three games (coaches tape) of Ingram, and I see him as the top RB in the draft. Today, let’s take a look at the video replay of the former Alabama RB's TD run vs. Arkansas and get into some coaching points.

1. Scheme: What we are looking at is the top run in every NFL playbook: the Power O. You can run it out of two backs, or as we see here in Ace personnel (2 WR, 2 TE, 1 RB). The same scheme and personnel grouping you get down in Atlanta with Michael Turner and the Falcons. The “U” (or “move TE”) is the kick-out block with the backside guard pulling through the hole. Even with the QB aligned in a “pistol” look, this is a scheme that Ingram will run throughout his NFL career. The Tide uses a pro scheme when it comes to running the football. 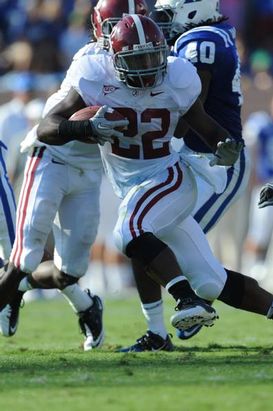 ICONIngram has "game speed" on tape.

2. Vision, burst: “Buzz words” we use a lot with the running back position—but they stand true when it comes to Ingram. In this scheme, or the other top runs in the NFL (stretch, Lead, Counter OF, zone, etc.), backs need to pick a hole and get up field to the second level of the defense. The most productive players on Sundays don’t hesitate with the ball—they make one cut and go.

3. Break tackles: Very simple. If you want to play in the NFL at the running back position you must show the ability to break tackles or make someone miss. Offenses can’t block the eighth defender in the box in every scheme, and once a back gets to that second level, he has to break a tackle. No place on the field for a RB that goes down on initial contact. Make a safety miss, run through the tackle or use the stiff arm—as we see here. Got to have that in your RB, especially in crucial situations (3rd and short, red zone, backed up).

4. Game speed: I saw the “game speed’ from Ingram on the coaches tapes and you can see it here in the replay. The key, when grading players, is to take that stopwatch time and compare it to what you see on tape. Does it match up? In Ingram’s case, the speed on tape is faster than the speed in shorts at the combine. He can run—in pads. That sells from my perspective.