Breaking down Locker's TD pass in the Apple Cup

From my perspective, Jake Locker is a QB that has a second round grade. Played in a pro system at Washington, has athletic ability (4.52 40 time) and can make the necessary throws in an NFL playbook. Inconsistencies? Sure, you can see that on tape, and as I watched down in Mobile at the Senior Bowl, a QB that will struggle at times with ball placement plus his footwork in and out of the pocket.

However, a prospect that is attractive from a developmental standpoint once he is in camp and working with pro coaching. There is upside here.

For today, let’s look at the former Washington QB on video and break down the throw he made (9 route) vs. Cover 4 (quarters) in the 2010 Apple Cup to beat Washington State. A scheme (“pump-seam”) that you will see on tape at the NFL level.

Some coaching points to discuss:

1. Pre-snap read: Versus Cover 4, the “waste motion” used by Washington (F motion to the closed side boundary) creates a 3x1 look that allows Locker to see the coverage adjustments. Even before the ball is snapped, Locker knows that he can work the Z receiver on the post vs. a SS or go backside and throw the 9 (fade) vs. the open side CB aligned in a press-man look. This gives him options and ultimately the green light to throw the deep ball. 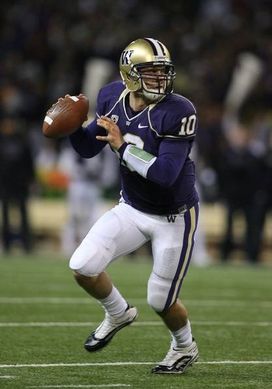 ICONLocker will throw this same route scheme at the NFL level.

2. Pump-Seam: Go back to the TV tape and watch the replay from the end zone angle. What we are looking at here is the classic “pump-seam” route. A scheme that former Tampa head coach Jon Gruden used to have at the top of his call sheet in the “high red zone.” Take the 3-step drop, pump to No.1 (X receiver) and come back to the seam (post in this situation). However, as we discussed in our first coaching point, with Locker seeing Cover 4, the free safety could come into play on the post from the backside. Throwing the 9 route is the right call. Good use of coverage recognition from the Washington QB.

3. Throwing the 9 route: From this replay, I like the ball placement here from Locker. Give you WR a chance to make the play and throw the ball to the up field shoulder. Too often we put these throws under a microscope, but when working vs. a CB that will have his back to the football (due to the press alignment), get the ball out and force the DB to play technique. Bottom line: when you have created a one-on-one matchup in the vertical game, allow your guy to go up and attack the football.

4. Game situation: Something to look at? I think so, because we are talking about a senior QB making a big time throw in a rivalry game. Look at the situation: 2nd and 21 with under a minute to play in a tie ball game. Plus, a win Washington has to get in order to qualify for a bowl game. This is what you expect from your QB. And I can tell you, as a former defensive player that is exactly what you want to see from your offense. Go win the game for us.