Breaking down Matt Flynn vs. the Patriots

Let’s go back to the video today and take a look at Green Bay’s Matt Flynn vs. New England from the 2010 season. With starting QB Aaron Rodgers on the sidelines, we got a chance to see Flynn play on the primetime stage vs. a good football team—and produce.

Today, I want to focus on his 66-yard TD pass to WR James Jones. The route, the defensive scheme and what we are seeing on the video replay that we can learn from. Check out the replay and then let’s get into some coaching points.

Personnel and alignment: Posse (3 WR, 1 TE, 1 RB) on the field for the Packers—a personnel grouping we see often from Mike McCarthy’s offense. But the key here is the alignment. I call this “Doubles Slot Open." A 3x1 set with the TE flexed out to take the spot we would normally see the X receiver (split end) align. This gives Green Bay a three-receiver look to the open side of the formation and multiple route combinations to choose from. 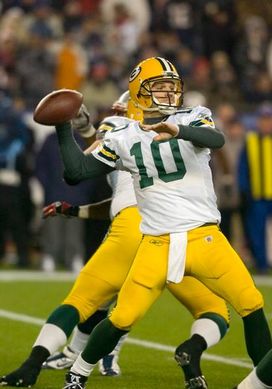 Coverage scheme: Again, we see 2-man (2 deep safeties, trail-man technique underneath) vs. the Packers. Although this is a common coverage in the NFL, I see it played much more vs. Green Bay. Yes, you can take away the vertical schemes up the field, but in the plays I have broken down here at the NFP, the Packers consistently rip this coverage apart. And, as we will see, it often puts stress of the safeties to play with sound technique.

Route concept: First, look at the game situation: 3rd and 7. Now go back to the route scheme. From my perspective, Flynn wants to read the inside combination of Jordy Nelson and Donald Driver running the “whip options” (stem inside, break out from the defender's leverage). With the Pats playing 2-man here, the DBs are going to sit hard with inside leverage and this route combination is a solid call on third down. With Jones? A classic double-move ("sluggo''), and a way to clear out the sideline for both Nelson and Driver to work.

Defensive angle to the ball: I talk about this often with safety play, and this is an example of a poor angle to the football. In 2-man, you are taught as a safety to play with enough depth (on top of the numbers) to take a downhill angle to the ball. That’s not what we see here from New England’s Brandon Meriweather. Instead, this is a lateral—or parallel—angle to the point of attack. And that isn’t going to get it done. Not only does Meriweather fail to make the play, he also knocks off the CB.

Ball placement: This is a solid throw from Flynn. He takes a shot down the field in this situation and by putting the ball on the up field shoulder he takes the CB out of the play. As we said above, 2-man requires the underneath defenders to play in a “trail-man” position. And vs. any vertical route, the CB is already sitting low on the receiver. Add that to the bad angle from the safety and we see an explosive play from the Packers.

Want to see a video broken down? Send me the clip at: matthew.bowen@nationalfootballpost.com