Let’s go back and discuss the AFC and NFC Championship games. My notes, breakdowns and some Xs and Os as we now look forward to Patriots-Giants in Indy at the Super Bowl. 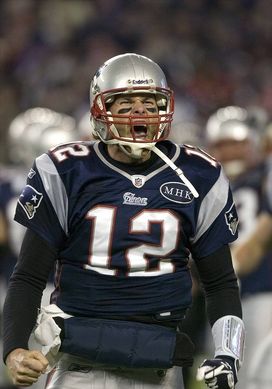 ICONBrady and the Patriots' offense worked the short to intermediate route tree to move the ball vs. the Ravens.

Patriots’ offensive game plan: I look at three schemes that worked for the majority of the game for Brady and this offense: the inside trap in the run game (out of the gun), the option route (Welker, Hernandez) and the intermediate dig route (Gronkowski). New England didn’t get the ball down the field and couldn’t produce TDs in the red zone when the Ravens dropped into their two-deep shell. However, when Brady needed a play in the passing game, he worked Welker (6-53) and Hernandez (7-66) underneath plus found Gronkowski (5-87) matched up against a Cover 1 (man-free) safety playing with outside leverage. And he had that all day.

Sterling Moore’s play vs. Lee Evans: Baltimore’s WR has to make this catch on the Championship stage to punch the Ravens’ ticket to the Super Bowl. We know that. However, don’t let that discount Moore’s ability to get the ball out in the end zone. DB coaches will call this “playing the pocket.” When you are beat (as Moore was), don’t panic at the point of attack. Instead, stick your hand in the pocket, find the ball and get it out. Such a crucial play for a CB that was beat earlier when he missed a tackle in Cover 0 (blitz-man) on Torrey Smith that went for a TD. Bottom line here is simple: Moore finished the play—and Evans didn’t.

Wilfork’s production: The Patriots’ nose tackle was dominant. Look at what New England did from a defensive perspective on third downs: rush three, drop eight and play Cover 2. You can do that when Wilfork wins at the line of scrimmage and walks the center back into the pocket with the bull rush. Next, go to the run front and Wilfork’s ability to penetrate, shut down the trap game and close down rushing lanes for Baltimore’s Ray Rice. On a day when Brady (22-36-239-2 INTs) made some questionable throws and the offense struggled in the red zone, Wilfork’s performance stands out.

Flacco's numbers: The QB was productive, worked the deep inside breaking concepts and put the ball where it needed to be when he targeted Evans in the final minute. He found the matchup he wanted late with Anquan Boldin vs. WR/DB Julian Edelman on the outside breaking routes, got the rookie Smith involved and controlled an offense that didn’t get consistent production from Rice and the run game. There is no question we can go back and find certain game situations to point out the negatives with Flacco, but he played good football today. Finishes with 306-yards, 2 TDs and an INT on 22-36 passing.

Cundiff’s missed FG: Got to have it. I don’t care if the execution was rushed because this is a kick that has to go through the uprights to send this game to OT. Add in the play with Evans in the end zone and we are now talking about two missed opportunities from the Ravens in the final minute. What else can you say here? Baltimore had a chance to go to Indy (or at least send the game into the extra period) and didn’t capitalize. That’s going to sting all offseason.

Continue to page 2 for my NFC Championship game notes…