Click here for a base look at zone pressure.

Before we roll into training camps next week, I want to go back to the chalkboard and talk some more zone pressure in NFL playbooks. A quick breakdown of how to get the Nickel Corner involved in the blitz front vs. Posse (3WR-1TE-1RB) personnel.

Take a look at the diagram up on the chalkboard and then we will get into some coaching points. 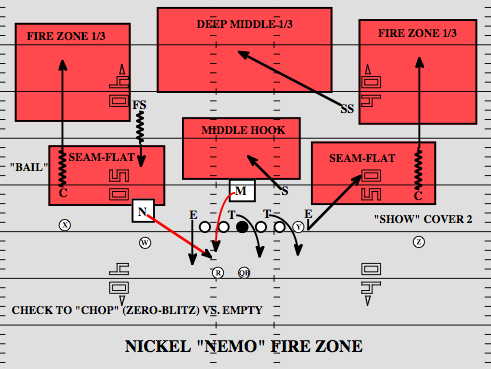 - Same idea with “Nemo” called in the huddle when we look at the base zone principles: rush five, drop six into coverage (3-deep, 3-under). Again, I always want to roll my defense into the blitz front. With both CBs aligned in a press-look (will “bail” at the snap) and the safeties in a 2-deep alignment, I want to show Cover 2 in my pre-snap alignment.

- I’m adding the Nickel (N) and the Mike (M) to the blitz-front with the closed (strong) side DE dropping into coverage. The key here is the open (weak) side DE. You want to coach him to rush vertically up the field to allow the Nickel to come underneath. With the Mike hitting the open side B gap, you can create a 3-on-2 vs. the OT and OG. And depending on how the offense uses the RB (R) in protection, you could get the Nickel on a free run at the QB.

- Is the ball guaranteed to come out quickly? Not with a 5-Man pressure. Remember, this isn’t a Cover 0 blitz. That’s why the coverage discipline is key along with disguising this pressure before the snap. Don’t show early when you stem to your blitz alignment and be prepared for the QB to test the secondary.

- A quick note on the "Chop" check up on the diagram. If they come out in an empty alignment, then check to a Cover 0 blitz and send the house.