Breaking down the Bears-Packers matchup

Let’s talk Bears-Packers today and look ahead to Sunday at Soldier Field. Five things that I want to breakdown as we get ready for some divisional football in the NFC North.

1. Dom Capers’ pressure: After seeing game film from the Bears loss to the Saints, there is no question the Packers will use their pressure schemes. Cause confusion in the Bears’ protection count and blitz off the edge to get after QB Jay Cutler. The key for Chicago? Identifying the blitz, sliding the protection to give Cutler time and accounting for pressure from the secondary. The Saints used both safeties in their blitz packages and that created free runners to the QB. Can’t happen again if the Bears want to get a win on Sunday—and someone needs to block Clay Matthews. 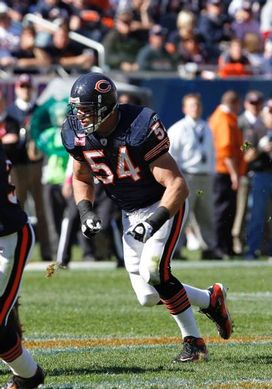 ICONUrlacher and the Bears play the Tampa 2 scheme better than anyone in the NFL.

2. The Cover 2 scheme: This is what you get from Lovie Smith. And from my perspective, it is the best coverage to play vs. Aaron Rodgers and the Packers offense. Yes, the Bears will use some zone blitz concepts (and some Cover 1), but Cover 2 (or Tampa 2) is the core call we will see. Are their routes to beat it? Of course: Flat-7, 4 verticals, Dagger (seam-dig), Double China-Post, etc. However, if you play top down, take away the deep ball and force Rodgers to settle for the check down or the underneath concepts, you will see success. Take away the big play to stay in the game, rush four and drop seven into coverage.

3. Finley vs. Urlacher in the red zone: Out in the field, Mike Backer Brian Urlacher will have the protection of the two deep safeties overlapping any inside vertical route in Cover 2, but inside the 20-yard line, expect Finley to be a target. Urlacher has to be sound with his run-pass keys, play the technique of the Cover 2 shell and find the ball on the Post route and TE Shake Route (double move). This is a great matchup to watch and Urlacher plays the inside vertical seam better than any LB in the NFL.

4 Bears’ WRs vs. Packers’ secondary: I broke down the impact of the Nick Collins injury on Tuesday at the NFP, but if the Bears want to target the middle of the field, they must win at the line of scrimmage. Slot man Earl Bennett will be out and we are still waiting to hear about the status of Roy Williams. But as I wrote in the Chicago Tribune this week, someone at the WR position for Chicago needs to step up and make some plays for Cutler. Beat press-coverage, create separation, run through the route scheme and move the sticks. This Green Bay secondary has given up some plays through the first two weeks of the season, but the Bears’ WRs still have to win and get into the route stem to produce.

5. Martz’s game plan: The OC has taken some heat this week in Chicago after his pass heavy game plan in the loss to the Saints. Now, let’s see how he changes the script on Sunday. Chicago does need to throw the ball, take shots in the vertical game and use their concepts out of the bunch looks to generate field position. But the run game has to be there. And I’m talking about a base run game here (Lead, Power O, Counter OF). Make Matt Forte a key part to the game plan and use the run to set up the boot and sprint action, plus vertical concepts off the play fake. Can’t drop back consistently vs. the Green Bay pressure—because Cutler won’t survive for four quarters.