Sprint action. An ideal concept to run vs. pressure teams out in the field and in the red zone. Move the quarterback and use outside breaking routes that work away from the defender’s leverage.

Today, let’s check out Falcons’ QB Matt Ryan working against the Ravens’ defense from the 2010 season. Crucial situation of the game vs. pressure. Run the Flat-7 and target WR Roddy White down the field for the winning score. First, let’s look at the video replay and then get into some detailed coaching points to break down the personnel, pre-snap alignment and route concept.

1. WR Splits: Atlanta is in their Posse (311) personnel (3 WR, 1 TE, 1 RB), but the key here is the pre-snap alignment. To run the 7 cut (corner route) and Flat combo (two outside breaking routes), you need room to work. That’s why we see the reduced splits here. Even with the pre-snap motion from TE Tony Gonzalez, this formation is set up to beat the defense to the boundary. Yes, you could get an inside concept (think Hi-Lo Crossers), but given the situation of the game, you should expect the offense to work the sideline. Have to know that as a defender coming out of the huddle. 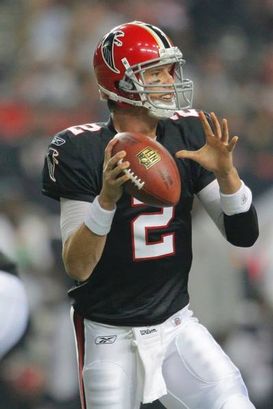 ICONRyan is working with a high to low read on the Flat-7 concept vs. the Ravens' pressure.

2. RB alignment: There are pre-snap keys in the backfield as well. Check out the alignment of the RB. I call that a “chowed” look (RB aligned on the outside shade of the OT). Two reasons for that. One, create space to release into the route scheme (just like we talked about with Mike Martz’s offense last week), and two, to seal the edge on the sprint action. The RB has to create a moving pocket for the QB. The alignment should tell you as a defender to alert the sprint action. Remember, offenses can be an open book if you know what you are looking at before they snap the ball.

3. The route concept: Ryan has three reads in his progression. Work the open (weak) side of the formation with a high to low read (7 to Flat) and then come back to your No.3 option with the Z receiver running back across the field on the deep crossing route. This isn’t exotic and can be run from a number of formation alignments vs. multiple coverage schemes. But when you see sprint action, expect the Flat-7, Curl-Flat or the deep comeback. Routes that break to the sideline and give the QB easy high to low reads.

4. Working vs. pressure: The Falcons catch the Ravens in a blitz scheme here. Baltimore is playing a form of Cover 0 (no safety help). What does that tell the defensive backs? Play with inside leverage and react to any outside breaking route by driving to the hip of the WR. As a coach, you tell your DBs in this situation to use the sideline as your help, but you still expect your players to drive on the throw and make a play. Is there contact here between White and the DB? Of course, but no one is going to make that call with less than 30 seconds to play. This is the worst situation you can be in as a DB, but you can make a play here by using your technique and reacting on the break to the 7.

Want to see a concept, coverage, route scheme, etc. broken down? Send the clips to matthew.bowen@nationalfootballpost.com