Breaking down the NFL Divisional Playoffs

Let’s go back and discuss the weekend playoff action in the NFL. My game notes, breakdowns, plus some Xs and Os from all four Divisional matchups. Here are three things I took from each game as we now look ahead to Championship Sunday. 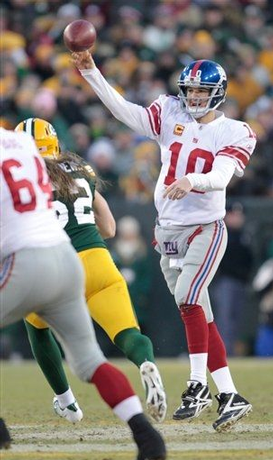 Manning challenged the Packers' secondary and threw for 330-yards in the Giants' win at Lambeau Field.

1. Manning’s production: Start with third downs, because that is going to make the Packers’ defensive coaching staff sick when they watch the tape. The Giants were able to protect vs. pressure and Eli went to work on this Green Bay secondary. He consistently made the throws to move the sticks, extend drives and targeted his talent at the WR position. Plus, I saw a QB that exposed a secondary that looked confused at times, gave up far too much cushion (distance between CB and WR) and couldn’t defend the middle of the field. Final numbers for Eli: 21-33-330-3 TDs-1 INT. Big production.

2. Giants’ defensive game plan: I would hand out a game ball to defensive coordinator Perry Fewell. The Giants were able to take away the vertical passing game from the Packers (longest completion went for 21-yards), apply pressure to the QB in the second half and consistently force Rodgers to take check down options. Fewell had a game plan that focused on coverage (Cover 2 and 2-Man), but he did mix in pressure in third and medium situations that allowed his secondary to go to work on receivers. This defense clearly played a more physical brand of football, and when you add in the multiple turnovers they forced vs. Green Bay, its hard not to be impressed with their style of play. They just shut down one of the top offenses in the NFL on the road at Lambeau.

3. Playmakers on the playoff stage: The Giants had them—in numbers—and the Packers’ didn’t. The front four on defense, Manning, Hakeem Nicks (a player that is scary in the open field after the catch), Victor Cruz, Bradshaw, etc. On the playoff stage you must get production from your top talent to advance. We didn’t see that with the Packers. Too many drops on offense, missed opportunities with Rodgers and a disappearing act from both Clay Matthews and Charles Woodson on the defensive side of the ball. That’s not good enough to win in January. Bottom line here is simple: when they Giants needed to convert or make a big stop in a crucial situation, they got it done. And they now advance to the NFC Championship. 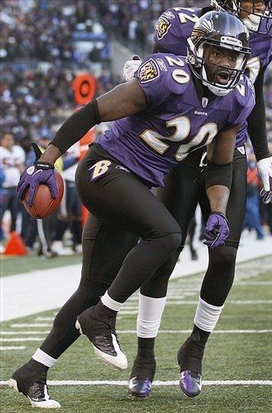 Reed's 4th quarter INT helped close out the Texans in the Ravens' 20-13 win.

1. The Ed Reed factor: The Ravens’ FS took away the deep ball because of his range and ability to read QB T.J. Yates. This is what makes Reed unique in the middle of the field. He can get a jump on the route before the throw, take good angles and find the ball in the air. The INT he made in the fourth quarter was a key to the Ravens win, but so was his ability to stay over the top of any route outside of the numbers vs. a rookie QB. Not many safeties in this league have the range and ball skills of Reed that allows the defense to play Cover 1 (man-free), blitz-pressure and also show some 2-deep looks.

2. Turnovers: I understand Jacoby Jones was trying make a play early I the game, but you have to know the situation and field position as a returner. Can’t put the ball on the ground or give away free points in a matchup were scoring drives are hard to come by. In a game where Baltimore struggled offensively (and in their play calling), field position wins. I already mentioned the Reed INT above, but Yates threw two more picks—and both were an example of inexperience at the QB position. Yates forced the out route vs. Ladarius Webb and then tried to hit the seam vs. 2-man where the Ravens’ CB showed up again with second pick of the day. Without a doubt this is a tough spot for a rookie QB, but mistakes in the playoffs send you home for the offseason.

3. Foster’s numbers: The Texans’ RB is a legit talent. Foster rushed for 132-yards and a TD vs. one of the NFL’s premier defenses. And what stands out from my perspective is the RB’s ability to get vertical up the field with one cut. He doesn’t hesitate, will press the edge of the defense and then square his pads to generate yardage. Foster had a lot of help from a Houston O-Line that won up front for the majority of the game, but I still go back to his vision and speed when he gets to the second level of the defense.Impressive football player.