Three plays from the one-yard line? That’s tough work from a defensive perspective in the NFL. Make a mistake, get caught looking in the backfield or take a simple false step to the line of scrimmage and you will give up points. However, this Saints' defense—a unit that has struggled this season—shut the door on Matt Ryan and the previously undefeated Falcons late in the fourth quarter.

Let’s run through the series, break down some coaching points and get into the Xs and Os on the Saints' "goal line stand" to beat the Falcons. 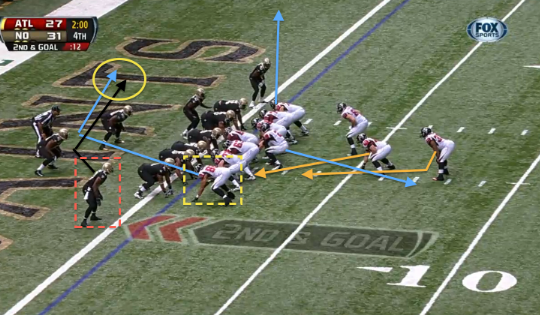 - The Falcons have an extra O-Lineman in the game, but the defense will see this as Jumbo personnel and bring their goal line package on the field. Both safeties—Malcolm Jenkins and Roman Harper—will read No.1 (Y and U TEs) for their run/pass keys.

- The Falcons use play pass here with open (weak) side run action. Force the second level defenders (LBs) to attack the line of scrimmage with Ryan targeting Tony Gonzalez on the shallow cross.

- This is tough spot for Jenkins. Playing with outside leverage (Jenkins has to set the edge as a “force” player vs. open side run), the Saints’ FS has to close to Gonzalez and essentially play this route from a trail position. Stick your eyes in the backfield (or hesitate) and the there is no chance to recover vs. a route breaking back across the field. 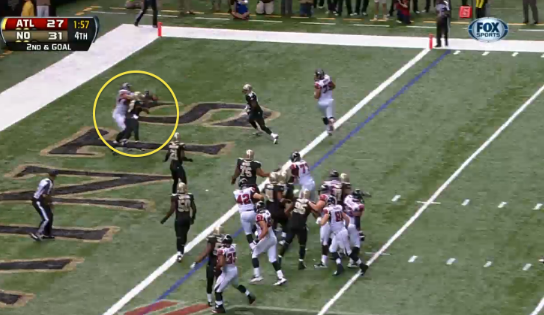 - Jenkins undercuts the route after he drives to the hip of Gonzalez. That’s a smart play from the safety. Remember, the field shrinks dramatically in this situation. Go ahead and use the end line as your help. Great finish from Jenkins as lays out to make this play. 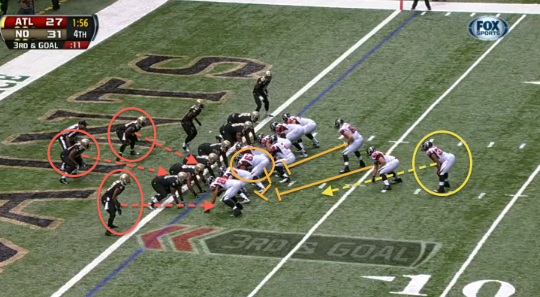 - On the “G Lead,” the play side guard will pull and kick out the force player with the FB leading up through the hole. A downhill power scheme with Michael Turner looking to get his pads square and find a quick inside running lane to the end zone. 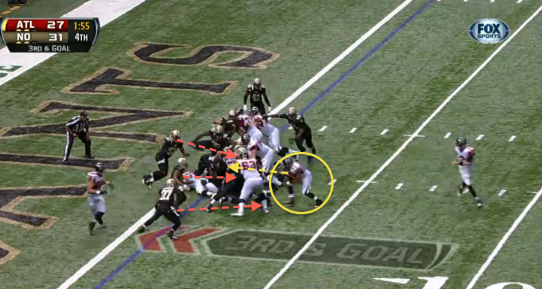 - Penetration from the Saints up front (knock off the pulling guard) and Jenkins on the edge. This allows both LBs to reads their keys, attack downhill and fit up the run. For Turner and the Falcons, this is a dead play. 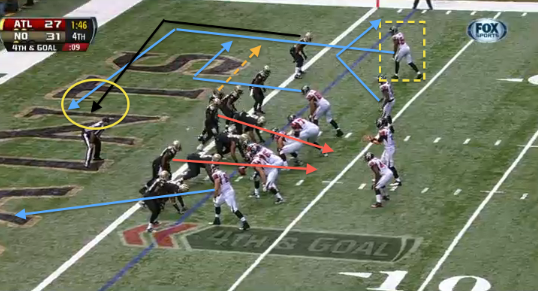 - A 3x1 alignment (to the field) from the Falcons. Outside of the red zone, this is an automatic alert to the closed (strong) side “Tare” concept (Option/Flat combo) with No.1 on the clear out 9 (fade) and the backside slant. Here, the Falcons are running the “Tare” with No.1 (Roddy White) on the dig route (square-in).

- Cover 0 (no safety help) from the Saints. I love the call. Think game situation: 4th down with Ace personnel on the field. Perfect opportunity to bring pressure (6-man blitz) and force Ryan to unload the ball.

- Quick coaching point on the Saints’ scheme. The LB inside plays almost as a “Rover” and drops right underneath Gonzalez on the option route. 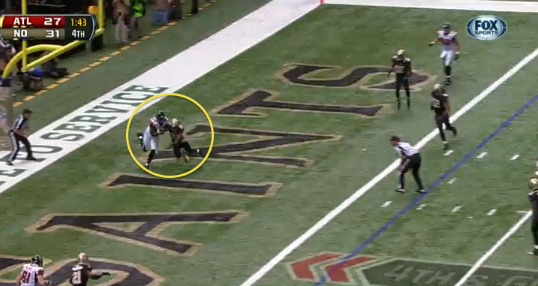 - Big play from CB Jabari Greer. Stop an inside breaking route in Cover 0? That’ not easy when you have no help in the middle of the field. However, because the Saints get pressure up front (and force Ryan to retreat in the pocket) the QB has to throw this ball off his back foot. And that gives Greer an opportunity to break on the route, “play the pocket” and get this ball out.