Breaking down the top safeties at the Senior Bowl

MOBILE—Talking to NFL scouts this week, the overall talent of the 2011 safety class isn’t very deep. Some solid mid-round prospects, but top to bottom this is an average group. Let’s run through the top three safeties that I have seen thus far down here at the Senior Bowl. 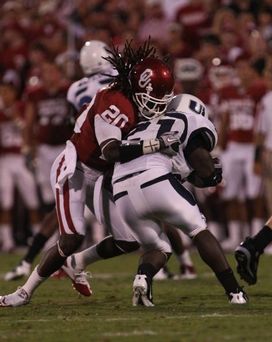 ICONThere is some buzz down in Mobile for Oklahoma safety Quinton Carter.

The coaches I spoke to think highly of the Sooners’ safety. He looked the part at Monday’s weigh-ins measuring in just under 6-1 and topping the scales at 211-pounds—with some real bulk up top. From my perspective, he does stand out on the North squad roster when you watch individual drills. Part of that is due to his size and length, but he looks athletic enough to play the free safety position in the NFL. The FS can get too tall in his backpedal and doesn’t have great feet coming out of his breaks, but I can see the attraction and the future potential with Carter. The combine will be big for him, as scouts will want to see him run in the 4.5’s in the 40-yard dash. Overall, he is the top safety I have watched this week.

The former Tiger is going to be a strong safety at the NFL level. I do see him as the type of player that can align over the TE in a Cover 1 scheme and as a Cover 2 safety—coming off of the top of the numbers. McDaniel has some size (6-0, 213) and did show some range from the middle of the field yesterday that extended outside of the numbers. I would draft a safety like McDaniel, let him compete with the veterans in camp and know you are getting a player who will have an immediate impact on special teams. There is always a jump for a college strong safety coming to the NFL and adapting to the physical play in the run front, but I believe that McDaniel can handle it. And you get a safety with ball skills on top of that.

Not very big—and that is the first thing you notice when he is on the practice field in pads. However, just as the NFP’s Wes Bunting wrote on Tuesday, Black shows up in a competitive setting. He moves well, has above average feet and balance for a safety, plus he can break on the ball. Will be able to walk down over the slot, play some man coverage and also show up on special teams as a cover guy. But I go back to the size (5-9, 183). There is no doubt that we are looking at a true football player with Black, but he will slip in the draft because there will be questions about his ability to handle the physical demands of playing safety on Sundays. However, down here in Mobile, he still stands out. Tough to overlook that aspect of the draft process.