Breaking down Tramon Williams vs. the Eagles

Click here for more breakdowns in my Inside the Playbook series.

Green Bay’s Tramon Williams was a big play cornerback throughout the Super Bowl run for the Packers. Today, let’s go back to Wild Card weekend and check out Williams using the TV tape to break down the technique of his interception vs. the 9 (fade) route.

The Eagles are in their “Jet” personnel (4 WR, 1 RB) vs. the Packers’ nickel sub package. What we will see from Philadelphia is a basic 4 Vertical route scheme with Green Bay in a base Cover 4 (Quarters) look. Nothing exotic here. Play coverage and react to the offense.

Let’s check out the replay and focus on Williams—because the technique is key from the snap of the ball.

1. Leverage: Cover 4 is a zone defense. However, Williams plays with inside leverage for a simple reason: the split of the No.1 WR. As we can see from the TV tape, the No.1 WR is aligned outside of the numbers and release with a vertical stem. No need for Williams to play with an outside shade here, because the WR can’t run an outside breaking route from the split. As a CB, you have to understand splits and alignments—because they always tell a story. In this situation, Williams has to play for a vertical release or an inside breaking route. That’s it. There is no room to run the out or the 7 cut (corner route) into the boundary. 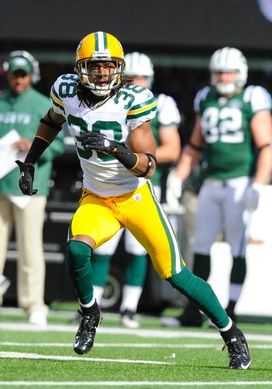 2. “Stacking” the WR: A term used for the CB to get on top of the WR. Here, Williams will backpedal at the snap and then “man-turn” (open hips to the WR) to create that “stacked” look on the WR. This is key, because it will force the WR to adjust his route and keep the CB out of a trail position. Tough to run a 9 route when the WR can’t create separation vertically down the field. Get on top as a CB and create an advanatge when the ball is in the air.

3. Locating the ball: Toughest thing for a CB, but Williams helps himself because he is “in phase” (on the hip of the WR). Too often, we will see the corner panic at the point of attack and start to reach. Not here, because Williams is able to track the pass from Michael Vick and use an “open angle” technique to flip his hips back to the QB. From a technique standpoint, this is teaching tape. Can't make a play until you find the ball.

4. Play the ball at the highest point: How often have we seen a WR go up over a corner in the end zone and take the ball away from him? No matter how well you play your technique as a defensive back, you have to go up and attack the ball at the highest point to prevent the WR from making a play. The point here: finish what you started. No different than DB drills you do at the high school level, because it is a big coaching point when the ball is in the air. Complete the process and make the interception.