Can the 49ers get value for Taylor Mays?

Taylor Mays has the size (6-3, 230) and speed (sub 4.4) that is attractive to any DB coach in the NFL. Unique to see that in the secondary. But after the 49ers let the entire league know the safety is on the trade market, I am curious to see what type of interest the club gets. 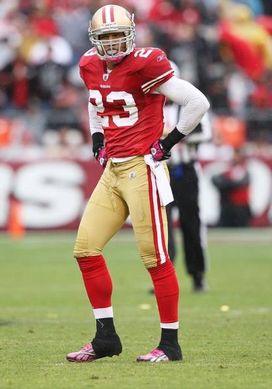 ICONThe Niners are looking to shop Taylor Mays to the entire NFL.

I talked to a long time NFL scout last night on Mays and here is what he said: “Big, fast and athletic, but average instincts and below average ball skills. Built to play SS, but isn’t a hitter. Better fit at FS where he can run and save TDs.”

The issue with the Niners safety is his ability to make plays on the ball. The same knock on his game when he came out of USC—and why he slipped to the second round despite his combine numbers.

With Mays, you should get a player on special teams that shows up on tape every Sunday. I would put him as a “L5” or “R5” (spots right next to the kicker) on my coverage team and try him out at the “gunner” position as well on punt.

Can’t find the ball or take the proper angles from the middle of the field as a safety? That’s fine—but for now I am getting the most out of him on my kicking units.