Can the Broncos limit the Patriots' TEs?

As we start to look ahead to the NFL Divisional Playoffs, I have to question if the Broncos can limit the production of the TE position for the Patriots. Both Aaron Hernandez and Rob Gronkowski can win in man-coverage vs. a safety or even a nickel corner in New England’s multiple formations and alignments.

A matchup issue for Denver that QB Tom Brady can exploit. And here are the three route concepts the Broncos must stop to advance to the AFC Championship. 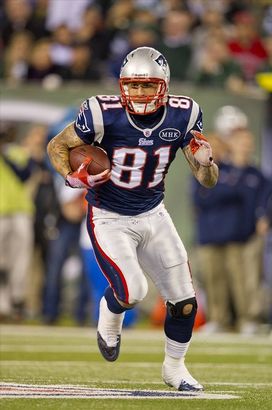 ICONBoth Hernandez and Gronkowski will create matchup issues for the Broncos' secondary on Saturday night.

1. Pin route: New England will run the “Pin” combination (Flat-Dig) out of different personnel groupings. Remove Gronkowski and Hernandez from the core of the formation as the No.1 receivers (Z, X alignments) and work the intermediate to deep dig route (square-in). As a safety, you must stay “in-phase” (on the hip) when the TE stems up the field, close to the up field shoulder and squeeze the route to your help in the middle of the field. However, the issue here from a defensive perspective is the size and length of Gronkowski and Hernandez on an inside breaking scheme. Not easy to find the ball when aligned with an outside shade (Cover 1 leverage) vs. Brady.

2. Inside vertical seam: Another route to the TE thrown inside of the numbers. From a press-man position, you have to win with your hands at the line of scrimmage and play through the outside stem (TE will work outside to create separation). If the TE wants to break to the 7 cut (corner route) force him to go through you based on your alignment. A top concept Brady targets in the red zone. And if you want to undercut the route, make sure you get your hands on the ball. You have safety help—use it.

3. (Whip) Option route: I’m throwing in the Option route because of Hernandez who posted 129-yards and a TD in the Pats' 41-23 win over the Broncos in Week 15. When the TE aligns as a No.2 in the slot, expect to see him “option” off of a safety or a CB based on initial leverage. Hernandez has excellent change of direction skills, can work laterally away from the defender and will produce after the catch. And with the “whip” option, look for Hernandez to stem hard to the inside, force the DB to over commit on the route and then break back outside of the numbers. From a technique perspective, make him go where you want. Use your eyes, hold your leverage and drive on the throw. Expect the option route and go make a play on the ball.

We will see more than just these three routes in the Patriots’ game plan on Saturday night in Foxborough. However, if you want to beat New England, you must control the production from Gronkowski and Hernandez starting with these basic concepts.