Can these five rookies play an impact role?

Click here to see my draft notes from the weekend

After looking back at some of the top picks from the NFL Draft, here are five players I want to breakdown in terms of their impact to the game plan in the 2012. 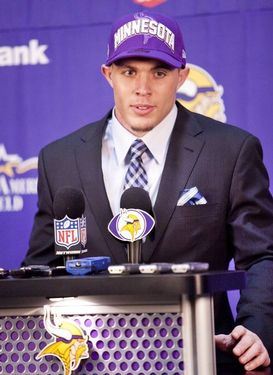 The Vikings need safety Harrison Smith to make some plays in the deep half.

SS Harrison Smith—Vikings: I talked about the new Vikings’ safety throughout the draft process because of what I saw down in Mobile at the Senior Bowl. The former Notre Dame product has size (6-2, 212), takes solid angles to the ball and has enough range to get off the numbers or play the middle of the field. In Minnesota, he has to get his hands on the football—especially in the deep half. The offseason and training camp will be big for Smith with route recognition, understanding WR splits and getting a feel for the speed of the NFL. Excited to watch him play.

WR Stephen Hill—Jets: The WR will have to put in the work to develop his route running ability. But looking at the Jets, Hill has to be the vertical threat in their playbook. Run the 9 (fade), 8 (post) and press the top of the secondary. Santonio Holmes can win in the intermediate route tree, but if the Jets want to see Mark Sanchez produce (along with Tim Tebow), you need the ability to flip the field and target the vertical concepts.

DE Shea McClellin—Bears: The Boise State DE has to fill a need opposite Julius Peppers in passing situations. Lovie Smith's defense is still a core Cover 2 team on 3rd downs and inside of the 20-yard line. Rush four and drop seven into coverage. However, you won’t see production as a unit unless there is edge pressure from the defensive front. Those multiple breaking routes (think double move at the top of the stem) and inside verticals that put stress on your deep half safeties can be taken care of up front. Force the ball to come out. That’s why Phil Emery drafted a DE with 4.6 speed.

TE Coby Fleener—Colts: Create some matchups in the passing game. Fleener can be the “move guy” in the Colts offense and I’m interested to see him work vs. a SS or LB when he is removed from the core of the formation. Rookie QB Andrew Luck will need a receiver to win in the middle of the field and show up inside of the 10-yard line. I'm looking at the 7 (corner), slant (backside of a 3x1 set), dig and seam. Fleener should be a productive rookie and create some issues for opposing defensive coordinators.

OLB/DE Bruce Irvin—Seahawks: Seattle took some heat for drafting Irvin at No.15, but if he can get off the ball and turn the corner vs. pro offensive tackles, this will be a great move. I don’t care if Irvin is labeled as a “situational rusher." Those are “money downs” in the NFL. And QB pressure sells. The key for the rookie: develop his technique at the point of attack. I know he can run, but the top pass rushers have multiple moves when they get up the field.