Can you beat this blitz?

Today, let’s talk open (weak) side zone pressure—and then draw up a route to beat it on the chalkboard. A base zone blitz concept that we will see throughout the league and when breaking down Tampa 2 defenses in Chicago and Indy.

First, I want to show you the basic 5-man open side pressure using the FS and the Will backer out of a 4-3 front. Rush five, drop six into coverage and play zone principles. Here it is drawn up vs. Regular personnel (2 WR, 1 TE, 2 RB) with a Pro Split alignment. 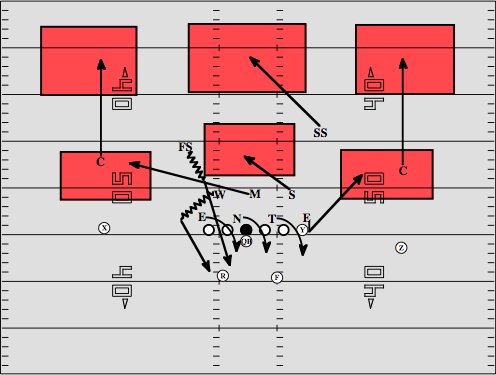 Pre-snap alignment: The QB is always going to find the safeties before the snap of the ball. Here, we are looking at a possible Cover 4 (quarters) alignment, Cover 10 (weak side man coverage with FS dropping into the box) and even Cover 2 if the safeties roll to the top of the numbers at the snap.

The coverage: Three deep, three under look with the SS and both CBs playing a Cover 3 shell (CBs will take first vertical release). Underneath the Mike and LDE are responsible for seam-to flat to the open and closed side with the Sam dropping to the middle hook.

However, as I have said many times, there is a way to beat every blitz—and I am going to show you a simple concept to produce vs. this scheme.

Go with the “Spot” route…

Previously, I broke down three route concepts that you must stop at the NFL level to have success in any defense: Flat-7, Dagger and the Spot. A 3-man combination (7, curl, flat) that can be run from a regular alignment, with pre-snap motion or from a bunch look.

We are looking at drawn up in a base split back set with the Z receiver running the inside curl and sitting down between the Sam and the DE underneath. And don’t forget about the backside X receiver on the 3-step slant.

Take a look at the Spot route drawn up vs. the open side zone blitz... 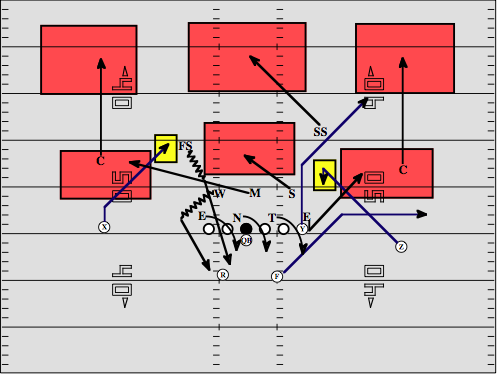 Nothing complicated from the offense. Run the TE (Y) on the quick 7 (corner) route to occupy the CB (remember, he takes the first vertical release up the field). Now, get the FB (F) into the flat to widen the DE and drop the curl route right in the hole. The middle hook player (Sam) has to carry the release of Y before he drops it to the CB (think matchup zone here) and that will leave a nice throwing lane open for the QB to hit the Z receiver for a positive gain.

If for some reason the Sam squats in his coverage, then go backside with the ball after the Mike clears the slant. A simple, inside breaking route coming back to the QB.

Blocking? If the O-Line counts the FS as a part of the front, then the LT can pinch down to pick up the safety. Finish it off with the RB (R) blocking hard to the open side to pickup the Will backer. Six-on-five protection scheme that favors the offense if they have the correct count.

What are your thoughts? Let me know what route concept you would use to make a play here…